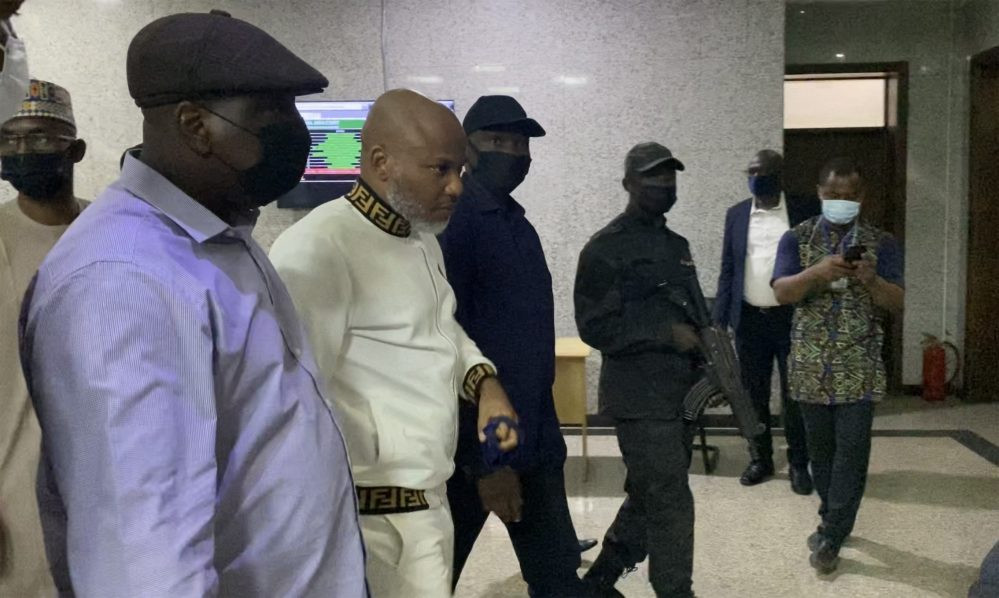 DSS explain why Nnamdi Kanu can’t be allowed to wear clothes with insignia of a lion’s head, says it “offends the standard operating procedures”

The Department of Security Services (DSS) on Wednesday February 16, explained why Nnamdi Kanu, leader of the proscribed Indigenous People of Biafra (IPOB) who is accused of various offences including treasonable felony and terrorism, cannot wear clothes with an insignia of a lion’s head.

At resumption of trial at the Federal High Court in Abuja, Mr Kanu’s lead counsel, Mike Ozekhome, a Senior Advocate of Nigeria, drew the trial judge, Binta Nyako’s attention to the difficulties encountered in trying to get new clothes to the IPOB leader at DSS detention facility in Abuja.

Recounting how the trial judge ordered that the DSS should allow Kanu to change his clothes from the Fendi jumpsuit he had been wearing to court, Ozekhome pleaded with Justice Nyako to ask the DSS counsel to provide an explanation.

Defending DSS’ decision to deny Nnamdi Kanu a change of cloth, the security agency’s counsel said the clothes that were brought for the defendant had lion’s head embroiled on them and this “offend the standard operating procedures”.

It was also gathered that Kanu insisted on wearing the Igbo ethnic attire which carries an insignia of a lion’s head.