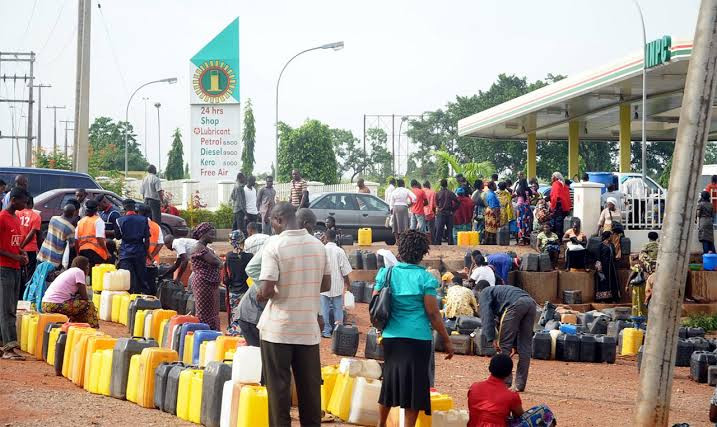 Fuel scarcity will end next week in Lagos, Abuja – NNPC

Nigerian National Petroleum Company (NNPC) has announced that fuel scarcity will end in Lagos and Abuja next week.

Speaking on Wednesday, February 16,Group Managing Director (GMD) of  Mele Kyari, apologised to Nigerians over the adulterated petrol, which circulated in several filling stations across the country last week.

The NNPC GMD tendered the apology when he appeared before the House of Representatives Committee on Petroleum (Downstream).

Kyari told the committee that there was no way the NNPC would have known that the imported petrol contained methanol.

He, however, assured that the current fuel scarcity being experienced in parts of the country, especially in Lagos and Abuja, would end by next week.

He said: “For this current situation, I assure you we have taken every necessary step to restore supply into this country. We have placed orders significant enough for us to cross into March, with at least 2.1 billion litres of PMS in our custody.

“The situation you’re seeing today, I can assure you by next week, it will vanish. All things being equal, because of distribution issues that we may not have control over, including the movement of trucks, otherwise we have robust supply arrangement to make sure we exit this issue.”

Kyari, while speaking on the circumstances surrounding the toxic fuel, said: “Before a vessel leaves the load port, they have to declare that the vessel meets our specification, they will send it to COMD, the importer, and confirm that this is the specification and that this product we are bringing to you meets this specification. On the basis of that, you allow the sail away of the vessel.

“Now, once it comes to the country, two things happen. We have NNPC surveyors who are now also required to validate that this product meets the Nigerian specification. Also, we have the regulatory authority who has to conduct an independent assessment to confirm that this product meets the specification that is in consonance with the existing regulation in the country.

“In case of all the problems we have seen, four of the cargoes that are particularly in question today, met all these criteria on arrival and that’s why they were allowed to discharge into terminals and conveyed into ship.

“Let me make it clear that methanol is not contamination, it is a regular addictive to PMS. In China, up to 15 per cent PMS contain methanol. On its own, it is not a contamination, the key issue is handling methanol. If we knew we will not accept this. Anytime methanol comes in contact with water, it emulsifies, it turns into a different chemical.”

“We didn’t know until our inspecting agents on January 20, to be precise, called our attention to the fact that it has seen emulsification in some of the depots and this may be a cause of concern. That is how we went ahead to check all the deliveries in our hands from all the four vessels that came that have already discharged and to confirm that all of them contain methanol.