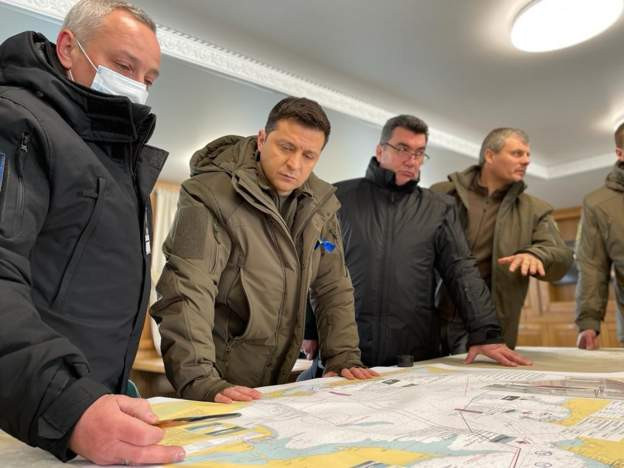 Ukrainian President Volodymyr Zelensky has reiterated his determination for his country to join Nato, saying there is “no other path” for Ukraine.

Its 30 members – which include the UK, US, Canada, France and three former Soviet republics  possess over 50 percent of the world’s nuclear arsenal.

And all members of the alliance agree to come to one another’s aid in the event of an armed attack against any one member state.

Ukraine is not a member of Nato. But, it is a “partner country” and may be allowed to join the alliance in the future.

Russia has warned against this potential partnership as a direct threat to its security as Ukraine is it’s neighbor and wants assurances from NATO that this will never happen, demands which NATO and the US say they will never agree to .

The US says as a sovereign state, NATO can decide on its own security alliances.

On Thursday morning, February 17, Ukrainian President Volodymyr Zelensky said that Nato membership is a “guarantee of security” for the country, ruling out any compromises.

Asked by the BBC’s Sarah Rainsford whether Kyiv was ready to give up its ambition of joining the Western military alliance, Zelensky answered: “It’s not Ukraine’s ‘ambition’. We lost 15,000 people. It’s not an ambition. It’s our life.

“It’s not about Nato. It’s about the future of the people… The question about Nato is not about membership. If we speak about Nato, the EU, the temporarily occupied territories – we are speaking about our independence. That’s it. That we decided what we want and will do in our future.”

Admitting that a path to joining Nato and the EU would be “long”, Zelensky stressed that “for me as president the most important thing on this path is not to lose my country.

Asked about pressure from some European nations who also wanted to keep Ukraine out of Nato, Zelensky said: “We can’t close our eyes… and say it’s only Russia that doesn’t want us there. It’s not true.”

Zelensky also ruled out any national referendum on Nato membership, saying Ukraine’s desire to be a member is already written in the country’s constitution.

Zelensky also accuses Russia of whipping up a crisis over the Nato membership issue “to justify being at the border… that they are supposedly protecting their sovereignty… that’s all distorted information.

He adds “some EU countries play along with Russia… which is wrong.”