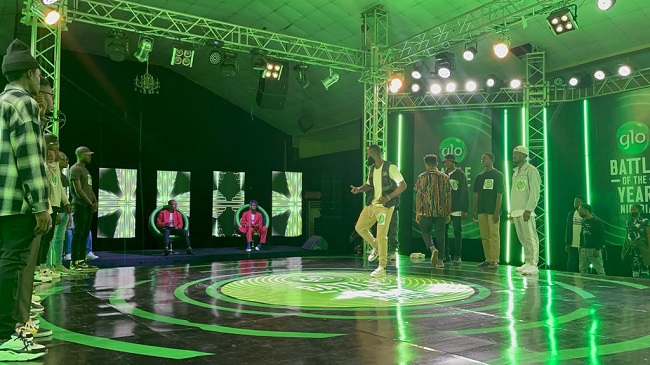 Bboy Whirlz stays presidential while SixGod is 7th time lucky in Ep. 3 of Glo Battle of the Year Nigeria

6 BBoys and 6 lockers emerged regional finalists in episode 3 of the Glo Battle of the Year Nigeria reality tv show which aired on GloTV, the company’s streaming app on Saturday February 19, 2020 with repeat broadcasts on NTA and AIT.

With their victory, the regional winners will head over to Lagos where they will take part in the semi-finals and finals of the competition.

The show opened with mild drama in Abuja as BBoy Off, was almost sent off the competition after he had a fainting fit just before his battle with Bboy Vic. Medics wanted him sent home but an emotional Off had assured them that he could go ahead. Alas, his difficulty breathing and the toll from his fainting spell cost him the prize leaving Lil Vic to proudly announce that “I came, I saw, I conquered.”

Bboy Whirlz made easy work of BBoy Jerry as they battled for the top position in Benin. For Whirlz, who dedicated his victory to his mother, his win was proof perfect that he is qualified to lead the Dance Guild of Nigeria as president.

If you have seen the movie 12 years a Slave then you will understand why BBoy SixGod was ecstatic after he humbled Prym to take the prize in Enugu. After 7 years as a dancer, the dark skinned and well-toned dancer could finally brag that he is not just a dancer but an award-winning one.

In Port Harcourt, Lil Monster’s efforts proved too little to defeat the exceptional and introverted Midnight in a keenly fought battle while Bboy Trixx proved himself to be a man of skills as he kept dipping into his bag of tricks to bamboozle his opponent. At the end of the duel, the two time champion showed that Bboy Lym was no match as he was crowned king in Kaduna.

Bboy Famous’ dreams of victory and helping out with the family came to a screeching halt as he was vanquished by his hard fighting opponent, Lil Dan who showed his mettle as he came into the finals with an injured knee and yet triumphed.

Six lockers emerged across the cities and will also be making their way to Lagos for the finals. A stand-out locker was Christiana Gift who emerged winner in Port Harcourt.

Two new judges, Frank Okwara and Locking Si’on were introduced alongside others like Bboys JC Jedor, Big Flow and Gidnasty. More judges would be unveiled in Episode 4 as the show progresses to the Afro dance category.

Meanwhile viewers can decide whether any of the finalists can come back to the competition. All you have to do is go to www.globotynigeria.com and vote for the dancer you want saved.

Viewers can also win N200,000 by participating in the fans challenge just by making a video of them dancing to the Glo BOTY theme song, uploading on any platform on social media using to the hashtag #GloBattleOfTheYear and tagging Glo. The top four videos with the highest engagements get to win N50,000 each.

Marriages can survive infidelity but not poverty — Reno Omokri