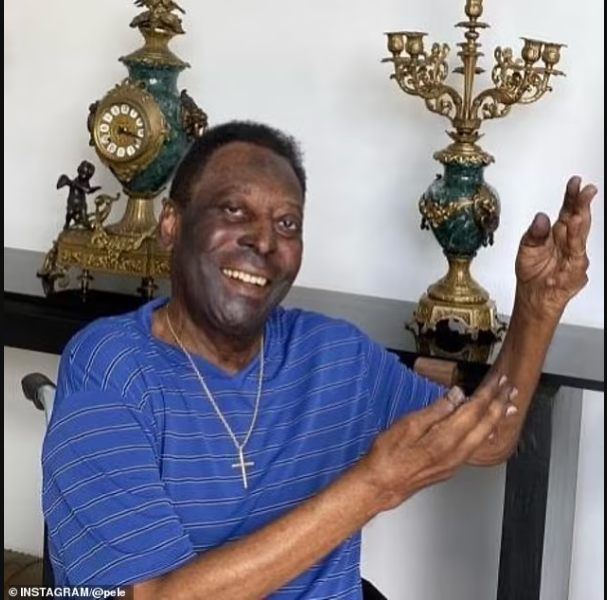 Brazil legend Pele, 81, is in hospital with a urine infection after chemotherapy sessions for a colon tumour

Brazilian football legend, Pele has been hospitalized with a urinary infection and will be kept in hospital for some time.

Pele, 81, who has been undergoing chemotherapy for a colon tumour that was removed in September, returned to the Albert Einstein hospital on February 13.

However, ‘during his stay routine exams were carried out that showed the presence of a urinary infection, a fact that extends his stay as a patient in the hospital,’ a bulletin from the Sao Paulo clinic said.

‘His clinical conditions are stable and he should be released in the coming days.’

Pele underwent an endoscopy last week which left him weak and has difficulty eating and speaking, according to a report by ESPN.

Pele has had chemotherapy to treat the tumour that was found during routine exams at the end of August. He was briefly put in intensive care shortly after the surgery on his colon, and has since recovered.

He was discharged on September 30, almost one month after being hospitalised, but has spent more days in the hospital since.

Pele had been recovering at his home in Guaruja, outside Sao Paulo and posts on social media updates on his health.

His latest post on his situation was on February 13 and read: ‘Friends, as I have been doing monthly, I am going to the hospital to continue my treatment.

‘I’ve already ordered a big TV and popcorn so I can watch the Super Bowl later. I will watch the match even though my friend @tombrady is not playing.

‘Thanks for all the loving messages.’

Ex-Minister and 2 others sent to prison for money laundering

‘Thank you for looking out for everyone you love,’ Actress Bimbo Ademoye pens touching tribute to Adesua Etomi on her birthday