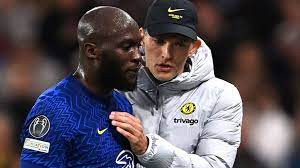 Don’t Laugh about him and make jokes

Chelsea manager, Thomas Tuchel has said striker Romelu Lukaku should not be made fun of after the £98 million ($133 million) striker had just seven touches in the club’s 1-0 win at Crystal Palace over the weekend.

The figure is the fewest number of touches registered by any player who completed the 90 minutes since such data was first recorded in 2003.

Speaking ahead of Chelsea’s Champions League clash with Lille in the last 16, Tuchel was grilled on how to get the best from the Belgian, who the Blues signed for a club-record fee in August.

“It’s not what we want and not what Romelu wants but it’s not the time to laugh about him and make jokes,” Tuchel said.

“He is in the spotlight and we will protect him because he’s our player.”

The German coach also pointed to the struggles of other strikers ( Fernando Torres, Alvaro Morata, and Timo Werner) at Chelsea in recent seasons prior to Lukaku’s arrival to prove his point that the Belgian is not the first.

“There’s even a history of strikers struggling a little bit at Chelsea so it’s not the easiest place in the world for strikers but I don’t know exactly why it’s like this,” he added.

“We had many games throughout the year together where we created many chances but struggled a bit in the conversion. Now at the moment it’s a time where we struggle to create too many big chances for our strikers and I think this is a normal period in a long season.

“We are well aware of it but like most of the time in football, there’s not one way to solve a problem. It’s a very complex sport and we try to keep on playing with belief in the team effort.”

The 28-year-old has just five Premier League goals so far in his second spell at Stamford Bridge, three of which came in his first three appearances.