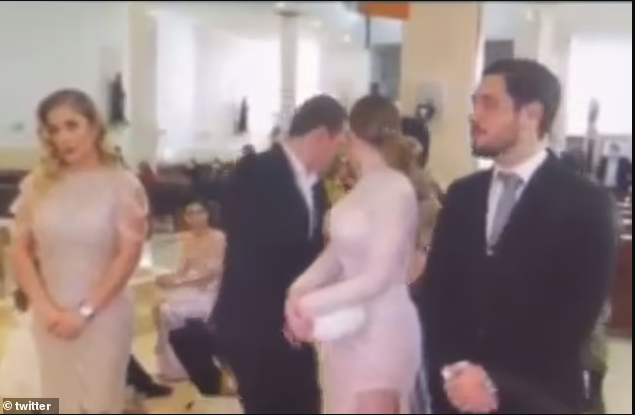 A fugitive member of Joaquín ‘El Chapo’ Guzmán’s cartel has been arrested by Mexican security.

José Bryan Salgueiro Zepeda was taken into custody at a church in Culiacán, Sinaloa, last Friday. in the middle of a baptism Mass.

Salgueiro Zepeda is one of the alleged leaders of the family-operated criminal faction known as ‘Los Salgueiro’ in the northern state of Chihuahua.

The shocking video shows the Sinaloa Cartel member, who is also known as ‘El 90’ and ‘El Brayan,’ standing next to two women and another man, who was identified by the Mexican press as El Chapo’s nephew.

In the video, the priest who was officiating the religious ceremony asked the group, ‘Do you renounce Satan?’ before one of the women next to Salgueiro Zepeda responded, ‘Yes, I renege.’

As the priest asked them again, ‘Do you renounce all of his seductions,’  a masked soldier stepped out of nowhere and grabbed Salgueiro Zepeda by the arm.

The Chihuahua State Office of the Attorney General said that he acknowledged being a member of the Los Salgueiro criminal organization and a group’s high-ranking leader in Chihuahua.

Salgueiro Zepeda was wanted on an outstanding arrest warrant for his alleged role connected to a May 19, 2020, kidnapping of an individual in Chihuahua.

A spokesperson with the Chihuahua State Office of the Attorney General told DailyMail.com that Salgueiro Zepeda is expected to appear in court Wednesday February 22, for his arraignment.

El Flaco founded the Gente Nueva in 2007, which served as an armed wing for the Sinaloa Cartel, and was reportedly involved in a deadly conflict from 2008 to 2012 that left 10,000 people dead, including cartel members, in the border town of Ciudad Juárez.

El Chapo, who co-founded the Sinaloa Cartel and reportedly made over $12 billion trafficking drugs, is serving a life sentence at a super maximum-security prison in Florence, Colorado.

The Weeknd and Simi caught kissing in Vegas (video)