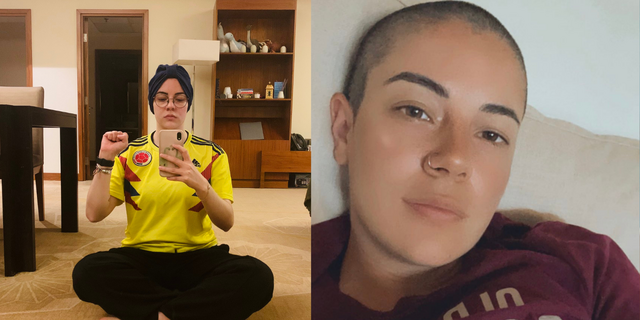 A female World Cup official is facing a sentence of 100 lashes and seven years in jail for ‘extramarital sex’ after she reported she was raped while working in Qatar.

Paola Schietekat, 28, from Mexico, was working for the World Cup organising committee when she complained she was raped by an associate who broke into her apartment and threatened to kill her.

She reported the June 6, 2021 attack to the Qatari authorities, which responded by accusing her of having an affair and charged her with ‘extramarital sex’, which is illegal in the Gulf state.

Schietekat was told by lawyers that one way of avoiding conviction was to marry her attacker but instead decided to flee the country, leaving behind what she called her ‘dream job’.

The charges against Schietekat, who is a behavioural economist, are still valid and she is expected to be sentenced in absentia on March 6.

Schietekat, writing on Julio Astillero, explained that her alleged attacker was able to gain access to her apartment in Doha because it is common for residents to leave their doors unlocked and rely on the security of the building.

The man allegedly managed to wrestle her to the floor and rape her, leaving her arms, shoulders, and back covered in bruises.

Schietekat said she took pictures of the scene and documented what had happened on her phone before fleeing her home and spending the night in a hotel, fearing her attacker would return.

The following morning she got a medical certificated and, with an official from the Mexican consul in Doha, reported the alleged rape to Qatari police using her limited Arabic.

Police asked whether she wanted a restraining order against the attacker or to press criminal charges against him. Schietekat told police she wanted to press charges and signed a statement in Arabic to the effect, giving officers the name and details of the man.

However, hours later, around 9pm, she was called and told to return to the station where she put in front of the man she had accused and questioned for three hours in Arabic.

The alleged attacker had told police he and Schietekat were in a relationship so officers asked to look at her phone to find evidence of intimacy, which she denied.

Police then asked her to undergo a virginity test, accusing Schietekat of extramarital relations before recommending the case to the public prosecutor’s office to bring charges against her.

Her attacker was acquitted on charges of assault because ‘there were no cameras pointing directly at the door of the apartment, so there was no way to verify that the assault happened’, Schietekat said.

She was then warned by lawyers that one of the only ways to avoid a conviction would be to marry her alleged attacker.

Schietekat chose to flee the country instead, leaving behind what she later described as her ‘dream job’ and was helped out of Doha by the World Cup committee.

‘I had never breathed with more relief than when my passport was stamped,’ she wrote. ‘In Mexico the adrenaline stopped and a slower process began, although just as complex and painful.’

She has since claimed that Qatar, which will be the first Arab state to host the FIFA World Cup in November 2022, cares more about protecting the attacker than the rape victim.

She also revealed she was previously raped when she was 17 but that she did not speak out about the ordeal at the time, as she explained why she chose to go public with the allegation.

The 28-year-old accused the ‘cynical’ international community of continuing to back Gulf states embroiled in allegations of ‘flagrant human rights abuses’.

‘Without a firm stance on the part of the international community, draconian, retrograde and even absurd laws will find a little hole to continue justifying themselves, in the shadow of major sporting or cultural events,’ she wrote.

She also attacked the Mexican foreign ministry for failing to protect its 600 citizens living in Qatar, especially against gender-based violence.

Since publishing her account, Schietekat has met with Mexico’s Foreign Minister Marcelo Ebrard who announced the state would provide her with legal representation ‘ensuring that all her rights as a Mexican citizen are respected.’

Qatar has been embroiled in scandals as the World Cup approaches, with reports of thousands of migrant workers dying in the country since it was awarded the tournament in 2010.