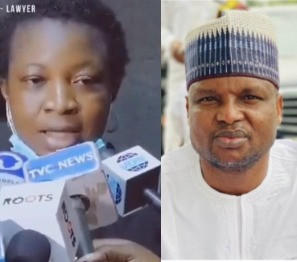 He is a hypertensive and diabetic patient. We have medical report to prove that

Cynthia Ikenna, counsel to suspended Super Cop, Abba Kyari, has asked the court to grant him bail as he is hypertensive and Diabetic.

Kyari who is in the NDLEA custody for his alleged involvement in drug trafficking had filed for his bail application which was heard on Monday, February 21.

The application was however turned down.

Speaking to newsmen after the court hearing, Ikenna said there are medical reports to prove Kyari has these ailments.

Watch a video of the lawyer speaking below…

“Marriage is not an achievement, it’s just a personal tick”– Blessing Okoro declares