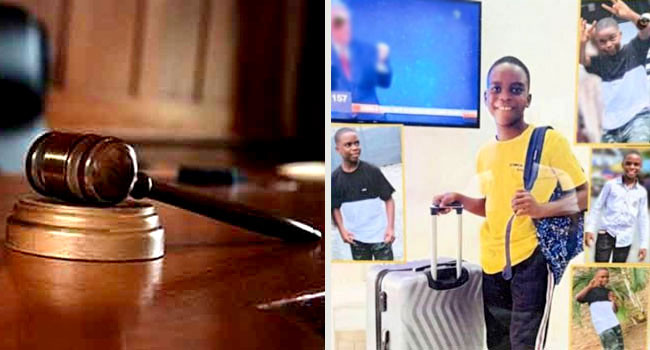 The Coroner inquest into the controversial death of a 12-year-old student of the Dowen College student, Sylvester Oromoni Jnr, continued on Monday, February 21, with a Chief Superintendent of Police, (CSP) Bamidele Olusegun, stating that some members of staff of Dowen College were indicted in the first legal advice issued by the Director of Public Prosecutions (DPP), Lagos State.

Channels TV reports that CSP Olusegun informed the court presided by Magistrate Mikhail Kadiri that he received a report from the DPP dated December 30, 2021, which was called interim legal advice recommended that the staff should be prosecuted for alleged negligence.

CSP Olusegun, who said he was serving with the homicide section of the Lagos State Criminal Investigation and Intelligence Department (SCIID), Panti section in 2021 disclosed this while being cross-examined by Femi Falana, SAN.

““There are facts that the students made series of reports of acts of bullying and intimidation against them to the teachers and house parents whose duties were to protect the children under their care.”

Facts further reveal that most of the statements and reports were not seriously attended to but disregarded by the house parents. No punitive measures were imposed beyond the suspension of known bullies in the school.

The school does not have an adequate policy for addressing issues of bullying, stalking, and unacceptable behaviour by the seniors against the junior students.

The witness who narrated to the court the various steps he took to investigate the matter, also confirmed that under cross-examination, the police were initially shocked by the decision of the magistrate court to grant bail to the Dowen staff and the five suspected students.

Falana asked  “Are you aware that there was a protest by the police to the Chief Judge that they were not allowed to conclude investigation?”

“You did say that at the time the suspects were granted bail, you had just got intelligence report and statements from the suspects, and this came as a rude shock to the police that the investigation was not allowed to be carried out?” Falana asked.

Falana: After this protest, were the suspects brought back for further interrogation?

No, the witness replied.

Falana: During investigations, one of the students told you that the deceased was bullied?

To which the witness replied, Yes.

“Did any of the witnesses tell you that the deceased was taken to the third floor of the school and tortured? Falana asked.

Witness: The claim wasn’t substantiated but yes, I was told.

Falana: Did any of the witnesses tell you that the deceased was injured on the 14th of November?

At this point, the witness was confronted with the statement of a student who wrote “Sylvester Oromoni played football on Sunday, November 14, he was dragging his leg because he had an injury and on Monday, November 15, he didn’t attend class but was in the sickbay.”

The CSP was also confronted with the statement of another student and was asked, “Is he the one who told you that the deceased was taken to the third floor where he was subjected to torture?”

The witness was then asked to read to the hearing of court, some of the conclusions from the police report dated December 23, 2021.

When asked to mention the students who formed the clique, the witness noted that his report mentioned Michael Kashamu and Edward Bague who were earlier reprimanded for bullying other students. He was, however, quick to say that there was nothing to link them to the Oromoni case.

The CSP was also asked whether he invited a journalist, Kemi Olunloyo, to shed more light on her report, carried out in the cause of the investigation, a report which suggests that the deceased, late Sylvester Oromoni wanted to join a secret cult and in the cause of doing this, was given a concoction to drink?

Yes, we invited her, the witness replied

Falana: What’s your finding as per the letter?

Proceedings came to an end at this point after some other lawyers in the matter complained that the interim legal advice and the police letter to the journalist had not been front-loaded to them.

“It has become part of the deceased family’s style to present documents that have not been front-loaded. We will not be able to continue with the cross-examination as a result of the surprises being pulled on us. This is regrettable.”