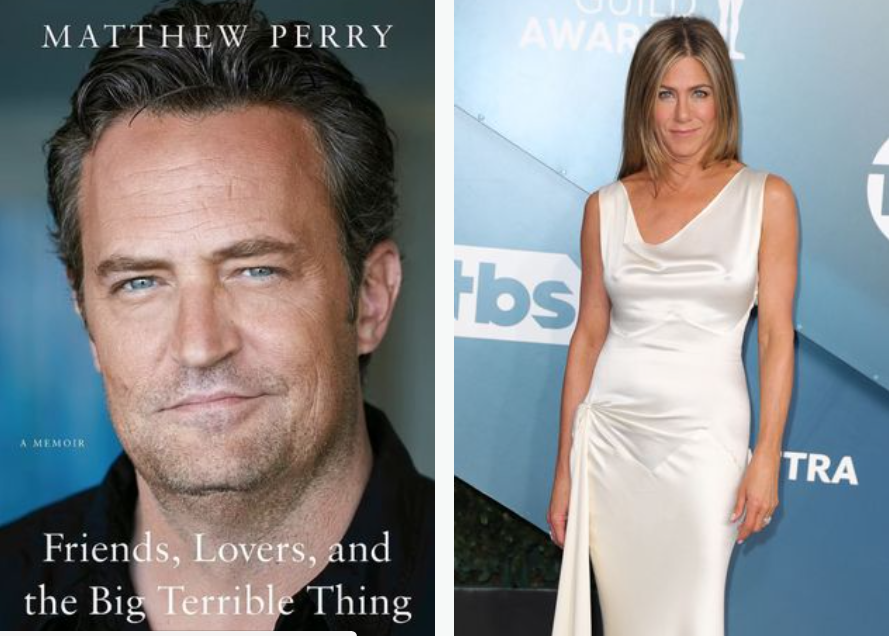 Matthew who played Chandler Bing in the iconic sitcom, had announced earlier that his memoir titled Friends, Lovers, and the Big Terrible Thing, is set to be released in November this year.

” So much has been written about me in the past. I thought it was time people heard from me. The highs were high, the lows were low.

“But I have lived to tell the tale, even though at times it looked like I wouldn’t. And it’s all in here. I apologize it’s not a pop up book.”

Jennifer who starred as Rachel Green, is reportedly anxious that his book could spill secrets surrounding her failed marriage to fellow Hollywood star Brad Pitt.

An insider told C loser Magazine the actress is nervous about what will be included in the book in order to help it be number one top seller.

The insider said she is anxious and “with good reason” with how much Matthew knows about the situation. The source said;

“He hasn’t suggested that the book will include private details about anyone else, but Jen knows Matthew will want a bestseller and, to achieve that, he’ll need to expose as many juicy secrets as possible.

“And being privy to one of the most high-profile showbiz splits in history, he knows that will be something everyone will want to know about.”

The source also said they’ve tried to calm Jennifer down, insisting Matthew “would never betray her” despite the pair growing apart in recent years.

Jennifer and Brad’s divorce came a year after Friends finished.

The Morning Show star was left heartbroken when her husband fell for Angelina Jolie on the set of 2004 film Mr & Mrs Smith, going on to marry and have six children with the actress, who he’s since split from.

Brad’s reported affair came as Jennifer wrapped the final scenes of Friends and admitted she was hoping to start trying for a family with the Fight Club star.

Matthew attended the pair’s Malibu nuptials in 2000 and spent a lot of time with Brad, who made a guest appearance on the sitcom in 2001.

I am proud of you baby’, Adedimeji Lateef hails his wife, Mo Bimpe