A Nigerian man has caused a major stir on social media after sharing a video of his transition from a man into a trans woman.

The man, identified as @Folafrancis on TikTok, took to the video sharing platform to share the controversial video and it has gotten people talking online. 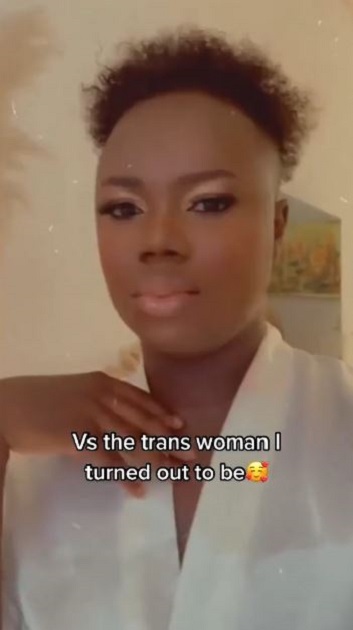 According to him, his parents thought they had a straight son but he turned out to be a trans woman.

In the video, Fola showed photos of himself dressed as a man, however, at the end, he is seen dressed, walking, dancing and acting like a woman.

Watch the viral video below,

In other news, a heartbroken young man has tattooed a lengthy note on his body after his girlfriend reportedly dumped him.

It was gathered that after his girlfriend broke up with him, the young man inked a lengthy note on his body recounting how he had so much plans for love.

In the write-up, he added that he would not forget her so easily, but as a result of what she has done, he doesn’t think he can ever love any girl again.

”I got much plans to love you but never believe I will lose you so soon but can’t forget you in a hurry cos you make me discover my talent. you make me amarron the good boy can’t love again (fake Love)”, the tattoo read.

“I paid for the BBL with my money. Leave me alone” – Alaafin of Oyo’s estranged wife, Queen Ola fires back at follower over comment about her backside