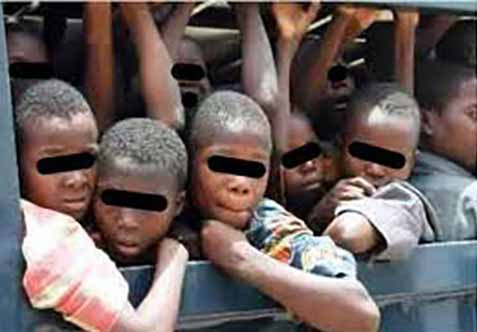 Men of the Delta state police command have arrested seven women in Warri for trafficking children who were turned into street beggars.

The 22 children who have been rescued by the state government were said to have been deceitfully taken away from their parents in the southern states of Abia, Imo, Anambra, and Ebonyi by the women with the promise of sending them to school in Delta.

Speaking to newsmen in Asaba, the Permanent Secretary in the Ministry of Women Affairs and Community development, Mrs. Oghenekevwe Agas, said that rather than sending them to school, the suspects turned the children into street beggars in the oil city while they (suspects) feigned blindness.

“FIDA drew our attention to the fact that there were some children on Airport Road, Warri, begging, and that three of them went specifically to a lady that sells close by who told them that some women brought them to Warri to beg, but that they actually told their parents that they were bringing them to school.

And since they came to Warri, they have been begging and sleeping on the streets. In addition to FIDA, our officers went to the police and we got the police to arrest them.

We rescued 22 children and arrested seven women who feigned blindness. Upon investigation, we discovered that the women were not even blind but were just feigning it and using the children to beg on the streets.

So we brought them to Asaba and we are taking them to the police headquarters.

We are going reunite the children with their families in their respective states. The children are from Anambra, Ebonyi, Imo and Abia states, that is what we have been able to establish.

The women would be prosecuted because there is a Child Right Law in Delta State that prohibits begging and exploitation of children. Even NAPTIP would be involved in this because it has to do with trafficking,” Agas said.