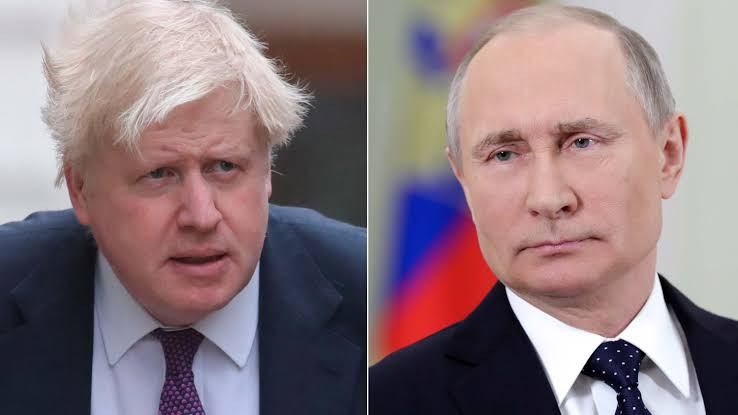 The UK has sanctioned five Russian banks and some Russian billionaires after President Vladimir Putin recognized two separatist regions of Ukraine as Independent states and ordered Russian troops into the country.

Addressing the House of Commons  on February 22 in London, England, British Prime Minister Boris Johnson unveiled the “first tranche” of British sanctions on Russia, condemning Vladimir Putin’s Ukraine aggression and saying Europe must “brace ourselves” for his next steps.

Johnson told lawmakers that people “will struggle to understand or to contemplate how, in the year 2022, a national leader might calmly and deliberately plot the destruction of a peaceful neighbor.”

“Yet the evidence of his own words suggest that is exactly what President Putin is doing,” he said.

“What (Putin) is doing is going to be a disaster for Russia,” he said, predicting “pariah status” for the nation and it’s president if it continues to further invade Ukraine.

“We will continue to seek a diplomatic solution until the last possible moment,” Johnson said.

“But we have to face the possibility that none of our messages has been heeded and that Putin is implacably determined to go further in subjugating and tormenting Ukraine.”

Theresa May, Johnson’s predecessor told Parliament that Britain must defend “the right to democracy itself,”

“What lies behind this is a wider, worldwide trend of authoritarian states trying to impose their way of thinking on others.”

Earlier on Tuesday, February 22, Germany announced it will halt certification of the controversial Nord Stream 2 pipeline that supplies natural gas from Russia to Germany.

“Europe has to wean itself off Russian hydrocarbons,”

“The United States is going to have significant announcements of its own a bit later today, including sanctions that we will impose in response to what Russia did yesterday,” deputy national security adviser Jon Finer said during an appearance on MSNBC.

He also offered a little more detail on the additional sanctions announcements coming later Tuesday, suggesting that this could stop short of the severe sanctions the US has previewed, pending “further actions” by Russia.

“If Russia takes further actions, we will have further significant and severe consequences that we can impose via sanctions on Russia, in addition to the other elements of our response, including security assistance to the Ukrainians to help them defend themselves, and the force posture, troop movements that you have seen the United States take, in the coming days,” Finer said, adding that the US remains open to diplomacy.

For now, an entire array of sanctions against Russia is not expected because, “if you are going to deter [Putin] from taking Kyiv and the country — still a serious probability — you have to hold some threats of sanctions against that,” a senior administration official told CNN.

The European Commission has also proposed sanctions to EU member states on Tuesday.

The proposals will place sanctions on 27 persons and entities including political figures, propagandists, military personnel and financial entities who the EU deems to be linked to “illegal activities” in the regions. There will also be sanctions for the 351 Russian lawmakers who voted for the recognition of the separatist regions and the 11 who proposed it .