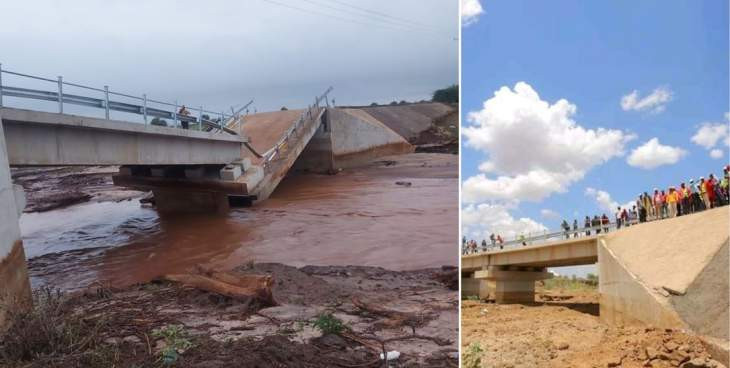 Ksh100M (N364m) bridge collapses one week after its launch in Kenya

A bridge which connects three sub-counties of Kajiado East, Kajiado South and Kajiado Central in Kenya, has collapsed one week after it was launched.

The much-hyped Ksh100million Paai bridge constructed by the county government of Kajiado, collapsed on Thursday, February 24 following flash floods in the area.

During its launch, Governor Joseph Ole Lenku said that the huge investment was meant to facilitate movement during the rainy season that had ordinary cut off at least seven villages.

The bridge had no signboard of who the contractor was. Residents say the remaining pillars appear shaky and fear the bridge will soon collapse completely.

“Our joy has been short-lived. This is an indication that the contractor did an extremely shoddy job. The flash floods’ intensity was not enough to warrant the collapse of a bridge of that magnitude. We are sad”

Fake military officer, two others arrested for burglary and theft in Kwara community