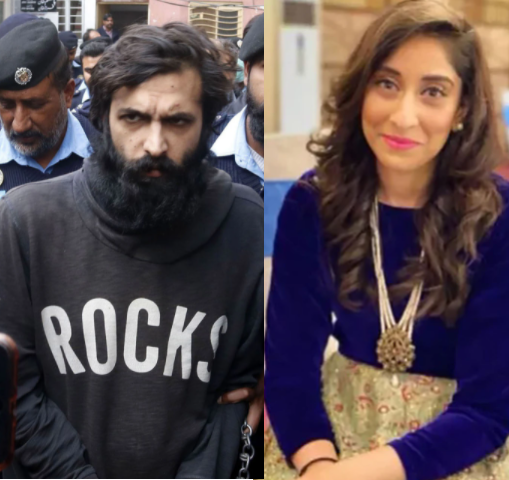 The Pakistani-American son of a wealthy property tycoon has been sentenced to death for raping and beheading his girlfriend after she rejected his marriage proposal at his Islamabad home.

Recall that in July last year, Zahir Jaffer, 30, kidnapped his childhood friend Noor Mukadam, 27, then tortured her for 3 days before beheading her (read here).

According to police, Jaffer sexually assaulted Noor,  tortured her with brass knuckles, and used a “sharp-edged weapon” to behead her when she turned him down.

Mukadam, the daughter of a former ambassador to South Korea and Kazakhstan, had made repeated attempts to escape Jaffer’s sprawling mansion but was blocked by two members of his staff.

Prosecutors said Noor Mukadam jumped out of a window at Jaffar’s home when he refused to accept her rejection, CBS News reported.

Jaffer then ordered a security guard and a cook to capture her before he killed her, the prosecutors reportedly said.

After the murder, Jafffer’s parents, Asmat and Zakir, who run one of Pakistan’s largest trading and project management firms, were accused of “not only causing abatement” but also for making the “utmost efforts to wipe off evidence”.

Jaffer’s parents knew about the kidnapping, according to the judge in a statement seen by dawn.com, and had “prompt information” about the horrors allegedly conducted by their son.

Less than a year after the incident, Jaffer has been sentenced to death.

“The main accused has been awarded the death sentence,” Judge Atta Rabbani said at the Islamabad district court on Thursday, Feb. 24, according to Agence France-Presse.

Jaffer’s parents were found not guilty of trying to cover up the crime.

The two staff members who prevented Noor from escaping Jaffer’s apartment were sentenced to 10 years in prison for abetting murder.

“I am happy that justice has been served,” said Noor’s dad, Shuakat Mukadam, who pledged to challenge the acquittal of the killer’s parents.

“I’ve been saying that this is not just my daughter’s case, it is a case for all the daughters of my country,” he said, according to Reuters.

Jaffer, who was frequently carried into proceedings by stretcher or wheelchair, was thrown out of court several times for unruly behavior, according to AFP. At one point, he also claimed someone else had killed Mukadam during a “drug party” at his home.

Jaffer’s lawyers argued he should be found not “mentally sound” but prosecutors argued that was a tactic designed to have the trial suspended.

Jaffer initially claimed he couldn’t be put on trial in Pakistan because he is an American citizen. However, the US Embassy in Islamabad said it had no involvement in criminal cases against its citizens overseas other than to provide information on legal counsel, check that they are not mistreated and offer to contact relatives, according to CBS News.

According to the court verdict, Jaffer will be “hanged by his neck until he is dead”, but he was also given a concurrent sentence of 25 years behind bars for abduction and rape.

Below is a video of the suspects being led away after the sentencing.

Former ‘Grey’s Anatomy’ writer admits she faked cancer diagnosis, lied about her brother committing suicide, and about having an abortion