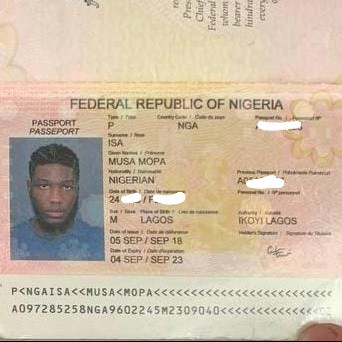 “I’ve been hexed by my father. His goal is to run me mad and kill me” Nigerian man in Ukraine cries out for help as he shares weird encounters he’s been having

A Nigerian man currently trapped in Ukraine has sent out a cry for help while claiming his father is trying to kill him.

He said he recently got a job in Ukraine. 5 days before getting the job, he said he had a dream where his father appeared to him and promised to make him mad and kill him.

He told his mother and they prayed against it.

One week into his new job, he said he got the dream again. This time, his father appeared to him with two other men. He said his father told him he was going to take his destiny and his glory, then he watched his father kill him in the dream.

He said he told his close aunts and other relatives.

However, he says he began acting out in reality and was violent at his new job.

He explained that he went to the HR and dragged a charger then he lost control of himself and didn’t know what he was doing anymore.

He said he went home, took his box and belongings, and began travelling to a city he doesn’t know.

He alighted from the bus midway and forgot his belongings in the bus, this included his phone, passport, documents,  and temporary resident card.

When he regained consciousness, he found himself in a hospital receiving drip.

When he narrated his experience, the police took him to the police station before giving him the address to the Nigerian embassy.

At the Nigerian embassy, he said he was told that he has been wilding out all over the city and several CCTV captured his actions.

He said the embassy took him in, gave him accommodation, and took care of him and it was during this period the war began in Ukraine.

He said he was safe in the embassy and they were trying to help him get a new passport when he began having the dreams about his father again.

After the dreams resumed, he said he “offed” again and left the embassy where he was safe to a place he doesn’t know.

He said he feels like he’s “trapped in a loop” and doesn’t know where he’s going or how to get out.

He then shared photos of his current location.

He appears to be in an underground train station with other Ukrainians taking shelter there to avoid the explosions happening in the city.

Musa said that even as he’s in the underground station, he doesn’t know what is real or not and he’s seeing things transform and humans magically turn to dog.

“I’ve been hexed by my father. His ultimate goal is to run me mad, misplace me with no means of identification and eventually kill me,” Musa wrote on Twitter.

If you really want to see world war 3, let all firstborns do DNA test — Reno Omokri