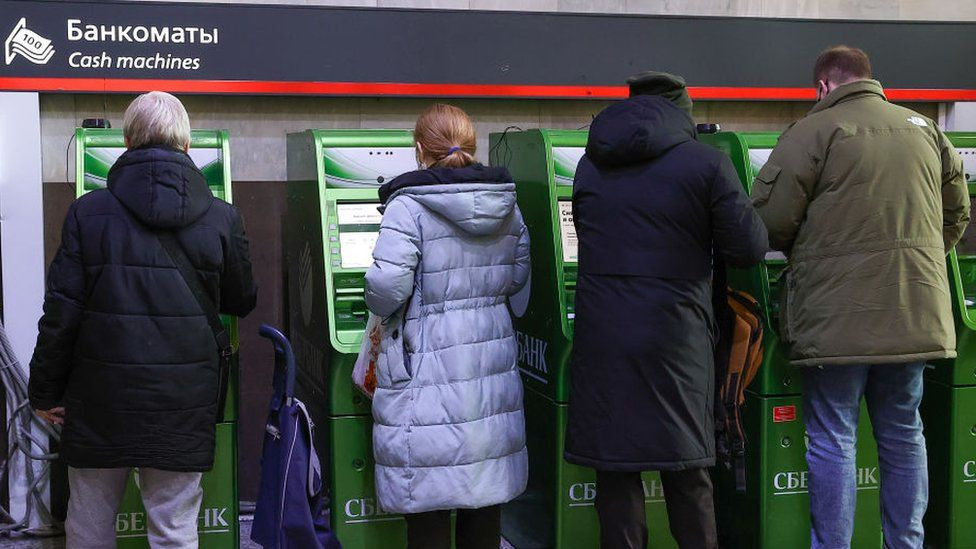 The Russia rouble has crashed by 30% against the US dollar, after the US and its allies announced new sanctions against Russia over its invasion of Ukraine.

The new record low for the Russian currency comes after some of the country’s major banks were banned from using the Swift international payment system over the ongoing conflict with it’s neighbor, Ukraine.

Following the rouble crash, and the citizens rush to withdraw cash from banks and ATMs, Russia’s central bank on Sunday, February 27 appealed for calm.

The move by the European Union, United States and their allies to cut off a number of Russian banks from the Swift payment system is the harshest measure imposed to date on Moscow over the Ukraine conflict.

Also in addition to the Swift ban, assets of Russia’s central bank will also be frozen, limiting the country’s ability to access its overseas reserves.

The intention is to “further isolate Russia from the international financial system”, a joint statement said.

Russia is heavily reliant on the Swift system for its key oil and gas exports.

The new ban on the Central Bank of Russia’s ability to use its roughly $630bn in foreign reserves undermines its ability to defend the rouble. Inflation is likely to go up because of the currency’s weakness.

This leaves the central bank with a few options, including raising interest rates or limiting the amount of money that can be brought into or out of the country.

Russia’s central bank said it “has the necessary resources and tools to maintain financial stability and ensure the operational continuity of the financial sector”.

In the first day of trading since harsh new sanctions were imposed, the Russian rouble plunged to a new record low against the US dollar. The euro sank more than 1%, while the price of oil surged above $100 per barrel..

Since the sanctions were imposed, several Russians have been pictured waiting in long queues, worried that their bank cards may be stopped from working or that limits will be placed on the amount of cash they can withdraw.

Alexandre Moutin, head of investments at SMBC Private Wealth, believes “a bank run is already ongoing and will most likely intensify in the coming days”.

“The military conflict will last longer than Putin expected and the reaction of the West and the global community might be more harmful that he expected too,” he said to the press.