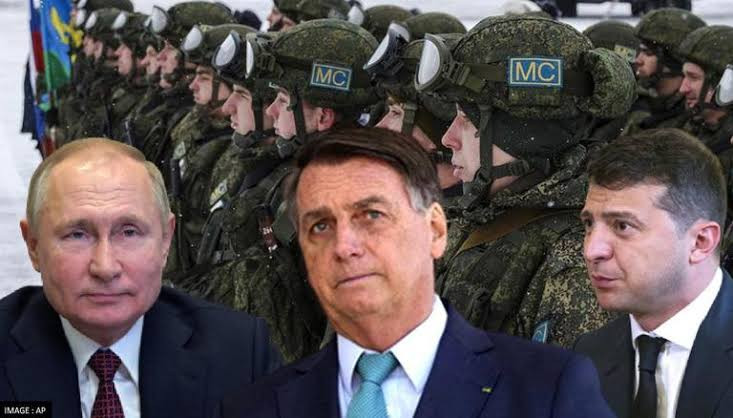 ‘Ukrainians trusted a comedian with the fate of a nation”

Brazil’s president, Jair Bolsonaro has refused to sanction Russia over its invasion of neighboring Ukraine.

Refusing to follow several western nations to impose damaging costs on Russia for its unwarranted invasion of a sovereign Ukraine, the right wing president Jair Bolsonaro criticized Ukrainian President Volodymyr Zelensky saying that Brazil would “adopt a neutral stance on Ukraine” and will not impose sanctions on Russia.

Speaking at a news conference while on vacation on Sunday, January 27, Bolsonaro said Ukrainians had “trusted a comedian with the fate of a nation” — referring to Zelensky’s former career as an actor and comedian.

He also said that Brazil is dependent on Russian fertilizer, and that action against Moscow “could bring serious harm to agriculture in Brazil.”

He added that he was in support of peace — “but we don’t want to bring more problems to Brazil.”

When questioned about a possible massacre in Ukraine, Bolsonaro said it was “an exaggeration to speak of massacre,”

He also defended Russia’s move to recognize the pro-Moscow separatist regions of Luhansk and Donetsk in eastern Ukraine as independent.

His comments come barely two weeks after he met with Russian President Vladimir Putin on a visit to Moscow on Feb. 16.

The comments was also after the United Nations Security Council voted by majority to hold an emergency meeting today to discuss Russia’s invasion. Brazil voted in favor of holding the meeting while Russia voted against it. India, China and the UAE abstained.