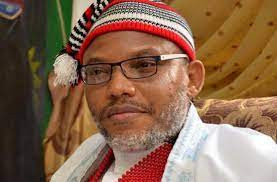 Ifeanyi Ejiofor, the counsel to the detained leader of the Indigenous People of Biafra, IPOB, Nnamdi Kanu, has said the secessionist group leader is very much alive and still being detained in the facility of the Department of State Services, DSS.

In a statement released on Monday, February 28, Ejiofor gave an update on his legal team’s routine visit to Kanu at the DSS headquarters in Abuja. According to him, the IPOB leader declined to step out of his detention cell, in protest against the refusal of the DSS to allow him to see his lawyers on three occasions.

He said efforts were being “intensified to pacify” Kanu to have a one-on-one discussion with his legal team led by human rights lawyer, Chief Mike Ozekhome, SAN.

“Our routine court-ordered visit to our indefatigable Client was led by the distinguished Senior Advocate of Nigeria, Prof. Chief Mike Ozekhome, SAN, who is also the Lead Counsel in Onyendu Mazi Nnamdi Kanu’s case.

Our esteemed team of Lawyers comprising of the Learned Silk, myself and Bar. Aloy Ejimakor, were all cleared most promptly upon our arrival, and consequently allowed to proceed with the business of the day- to pay Nnamdi Kanu a visit as his lawyers.

We were immediately ushered into the room designated for the visit. All the protocols were duly observed, as we willingly submitted ourselves to same, in line with the DSS stipulated routine guidelines.

We waited until minutes turned into an hour, and there was no signal that we would have Onyendu brought to us.

Consequently, the erudite Silk leading our team raised alarm and demanded to have the attention of the DSS superiors for explanation on why a court-ordered visit which, ordinarily, should not extend beyond two hours was taking almost one and half hour waiting time, with no hope of meeting with Onyendu.

Following the stout protest by the erudite Silk, we were consequently brought in, to meet with some superior officers at a meeting where all superior personnel connected with the matter were invited.

Far-reaching contacts were made to establish the fact that our Client- Onyendu Mazi Nnamdi Kanu was presumably protesting the previous three visits which were aborted by the DSS.

All efforts made to move the visit to his very location of detention were not granted by the DSS, as they insisted that our request ran contrary to their procedure and guidelines.

Effort is presently being intensified to pacify Onyendu to have one-on-one discussion with his legal team, to enable us brief him on legal steps we may be compelled to take and measures to be adopted to assure him that there are legal consequences for flagrant violations of court orders by the DSS.

We are quite hopeful that this needless impasse will be resolved between now and tomorrow morning,to enable the legal team led by Chief Ozekhome, SAN, to conduct the visit tomorrow. That has so far been assured us.

We can authoritatively confirm to you all at this stage that ONYENDU MAZI NNAMDI KANU is very much alive, and still being detained in the facility of the State Security Services (DSS) National Headquarters, Abuja.

We shall continue to keep you updated on matters connected with this visit to our indefatigable Client- Onyendu Mazi Nnamdi Kanu, and any other compelling attendant concerns thereto.

Thank you all, UMUCHINEKE and remain richly blessed”.

The IPOB leader is answering to a 15-count treasonable felony charge the Federal Government preferred against him. The charge against him borders on his alleged commission of act of terrorism, felony, incitement, unlawful importation of a radio transmitter, and headship of an illegal organization.

Trial Justice Binta Nyako had ordered the DSS to allow Kanu to have access to three visitors, two days in the week.