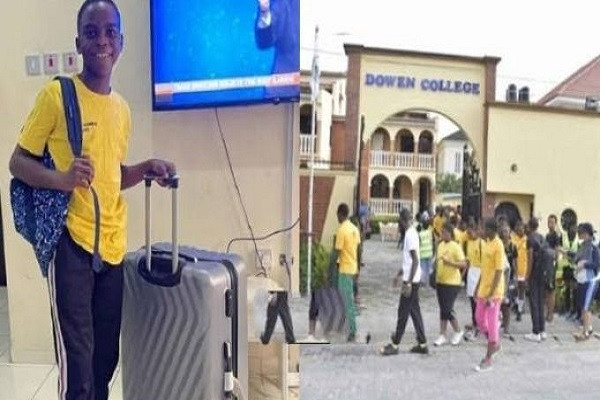 No cult in Dowen college- Teacher testifies before coroner Inquest

The coroners’ inquest into the controversial death of late Dowen College student, Sylvester Oromoni resumed on Monday, February 28, with one of the school’s teachers, Hammed Ayomo, testifying.

Ayomo who is also one of the housemasters told Magistrate Mikhail Kadiri that there is no secret cult in the school.

Recall that after Sylvester’s death, his father, Sylvester Oromoni Snr, had alleged that his child was threatened to join a cult group and forced to drink a substance that led to his death

Ayomo who was the ninth witness in the proceedings said he has been employed by the school for 13 years and also served as guardian to the late Sylvester Oromoni Jnr.

While answering questions from counsel to the Oromoni family, Andrew Efole, Ayomo was confronted with a statement he made to the police to the effect that the deceased had complained that some students were begging him for his provisions. The late Sylvester had then opted to keep the provisions with the housemaster.

The witness also testified that the deceased requested to change his room at some point as a result of his personal effects going missing. He, however, said that the issue of stolen items are not peculiar to the deceased but noted that he helped him to search for it.

When asked about allegations of bullying, the teacher said he wasn’t aware that the deceased was beaten.

The parents said he was dragged down, beaten with a belt, is this possible? One of the lawyers asked.

“It is impossible” he said

“As a houseparent, can you tell the court when the principal became aware that the boy was sick?” the lawyer had asked

“On November 27, 2021, I called the mom to ask after Sylvester, she said they were in church and that the healing hands of God were upon him,” he said.

On November 28, I called the principal and told him one of our boys was at home and is staying too long and she asked for his mom’s number then called but no response.

I called the mom and she picked and I connected the two of them then we heard him screaming in the background. She asked why he was screaming, the mom said they were massaging his body and the principal prayed for him.”

The coroner, Magistrate Mikhail Kadiri also had some questions for the witness. He asked if there was a standard practice the school follows on the discipline of students. Mr Ayomo replied in the affirmative.

“Are you aware of the issue of the sister’s private parts? the coroner asked

“To you, was that a minor or major case,” asked the coroner

“Are you surprised the school didn’t take any measure against the boys mentioned?

The Assistant Director of the hostel, Mr Valentine punished the student but I am not aware if the management as a whole took any disciplinary action against him” the teacher said

The Coroner then asked “As a father how would you feel about this? Would you still have confidence in the school?

“I won’t be happy, but I will still have confidence in the school”, the teacher replied.

While being cross-examined by the school’s counsel, Izuchukwu Ohajinwa, Ayomo told the inquest that there was no cult in the school, adding that it was not possible for the deceased to be beaten by the suspected students.

“No cult in Dowen. The rooms are closely linked together and it’s impossible for the deceased to be dragged down and beaten with a belt by other students.”

Counsel to the Nig Bar Association, Bernard Onigah then sought to know what advice the teacher had on the whole incident.

Further proceedings to continue today March 1 with the school principal expected to testify.

Five dead as father kills his 3 kids, their chaperone and himself inside California church