Two young security guards who were dancing on duty in a viral video have allegedly been sacked from their jobs.

The two young boys in a video that went viral a few days ago were seen displaying amazing steps as they joyfully opened the door for customers who came into the restaurant in Aba.

However, while social media users applauded them for their dance skills and going about their jobs with so much happiness, their actions were reportedly tagged as unprofessional by their employer and have cost them their jobs.

According to a Twitter user, @shoeguyotis, the boys have been relieved of their duties for unprofessional conduct. 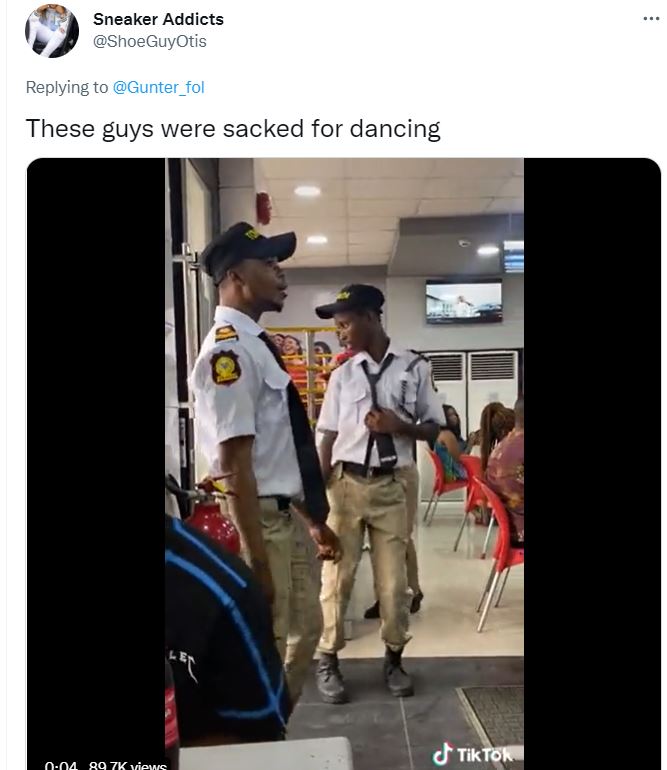 Watch the video of them dancing below,

In related news, a Twitter user, identified as Dipo Awojide on the platform has shared the sad story of how a young lady lost her job on her first day of work.

According the Twitter user, the young lady who was recently employed was sacked on her first day at the office after asking a manager if “she stands a chance with him and can sit on his face”.

Dipo Awojide who doubles as a personal development coach and lecturer, revealed that the lady in question will be paid for one day after getting sacked, and disclosed that his firm will be putting out advert for the vacant position soon.