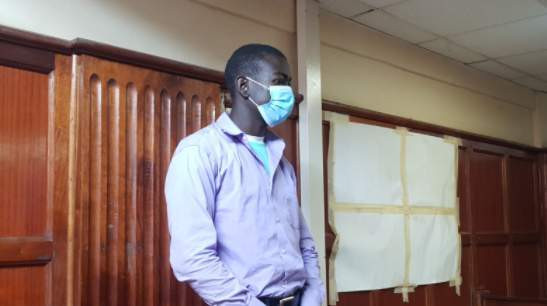 Man arraigned for pretending to be a police officer in court

A Kenyan man has landed in trouble after pretending to be a police officer to two court journalists based at Milimani Law Courts in Nairobi.

32-year-old Alex Oyula Baraza pleaded guilty when arraigned before Milimani Law Courts in Nairobi, over the offence he committed on March 1, 2022.

“You are charged that on March 1, 2022, at Milimani Law Courts within Nairobi county you pretended to be a police officer”

According to a police report filed in court, the accused is said to have gone to Milimani Law Courts where he introduced himself as a police officer on duty to collect some prisoners.

The accused was then referred to gate three which is only reserved for court officials and police officers and was allowed entry.

At the court, the accused met two court journalists and pleaded with them to accompany him to photograph some items which he claimed he intended to use as exhibits in an ongoing case.

The two journalists agreed to his request and the three later boarded a taxi but were stopped by the security guards manning gate three.

The guard realized that the two were not prisoners as he had previously claimed. He was then arrestedd by the security officers and was taken to Capital Hill police station for further interrogation.

After pleading guilty to the offence, Senior Principal Magistrate Bernard Ochoi ordered that he be remanded at Central police station until March 4 for sentencing.