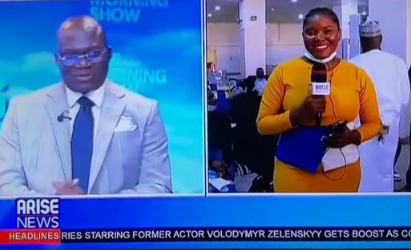 AriseTV anchor and former presidential spokesman Reuben Abati expressed his displeasure after a correspondent called him by name on live TV this morning.

The reporter Mary Chinda was at the airport to give an update on the Nigerian evacuees and called him by his name, Reuben, when he asked her a question.

Reuben couldn’t hide his displeasure as he asked her if she was at his naming ceremony.

Watch a video that captured the moment below

“What did we do wrong?” Biola Bayo reacts to the caricature of her and her colleagues