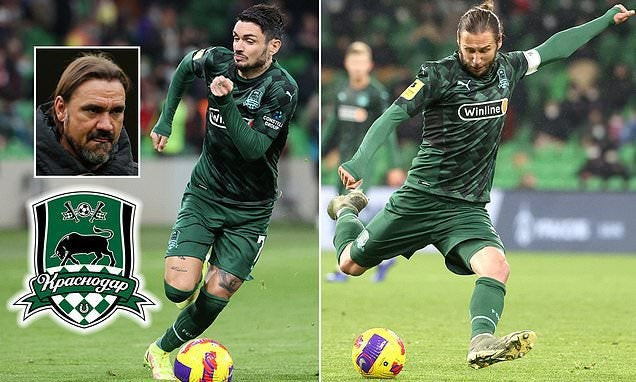 Russian football club, Krasnodar have agreed to suspend the contracts of their eight foreign players, just days after Daniel Farke announced he would resign as their manager following the invasion of Ukraine.

While no official reason has been given for the decision to freeze their deals, the club are now facing a mass first-team exodus and found themselves unable to fulfill a league fixture as the bloodshed in eastern Europe reaches its eighth day.

The list of players who will be released includes former Newcastle midfielder Remy Cabella. According to reports, he is already training with former side Montpellier.

Grzegorz Krychowiak, formerly of Paris Saint-Germain, Sevilla, and West Brom, is also braced to leave despite putting pen to paper on a three-year contract last August.

Another notable name allowed to exit is Jhon Cordoba, who joined them from Koln just six months ago.

Among those to have also had their contract paused are Erik Botheim, Cristian Ramirez, Kaio, Wanderson, Viktor Claesson, and Junior Alonso.

Armenian Eduard Spertsyan is expected to stay put at his current club, however, despite being listed as one of Krasnodar’s foreign contingent.  Alyaksandr Martynovich of Belarus will also remain with the first-team set-up, according to Mail Online.

Krasnodar were rocked by the departure of manager Daniel Farke in mid-week. The former Norwich City boss, left along with his entire coaching staff after agreeing a mutual termination of their deals, having not coached a single game.