Moment Davido’s aide, Isreal DMW stepped out on stage at the 02 (video)

Davido’s personal logistic manager, Isreal DMW, had his wish come through at Davido’s sold out show at the O2 Arena, as he opened the concert.

Recall that some weeks ago, Davido shared a screenshot of a hilarious WhatsApp conversation between him and Isreal DMW, where the latter noted he wished to perform on stage at the 02 Arena, London. 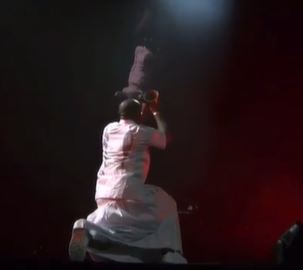 In the chat, Israel expressed his desire to welcome his boss on stage at the concert, and to show he really means business he sent his boss a video of his rehearsals.

Well, Isreal DMW, lived his dream as he opened the concert on Friday night, March 5.

In other news, Davido’s logistics manager, Israel Afeare, popularly known as Isreal DMW, has hinted that he can do anything for his boss.

In a video serving online, Israel is seen calling on God to strike him down if he ever fails to take a bullet for the DMW boss.

Israel, who had with him a red cup, poured some of the content of his cup on the floor to make the request.