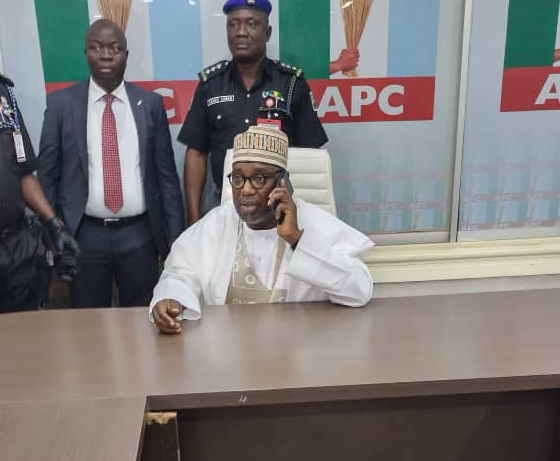 The ruling All Progressives Congress (APC) has dismissed reports of the removal of Yobe State Governor, Mala Buni, as its interim national chairman.

There were reports that Mr Buni was sacked with the approval of President Muhammadu Buhari who then appointed Niger State governor, Abubakar Bello, as a replacement.

However, the APC said this is false.

The APC interim secretary, John Akpanudoedehe, said: “The APC is a progressive political party guided by rules. Leadership changes are not announced by ‘sources’ through name dropping in the media.

“We urge our teeming supporters, members and indeed the general public to remain calm and support the Governor Mai Mala Buni-led APC CECPC conduct a rancour-free and credible National Convention deserving of our great party.”

Despite the statement, Governor Sani Bello arrived at the APC National Secretariat in Abuja, Monday, March 7, and parked his car in the chairman’s spot.

Bello is currently presiding over a meeting of the APC Caretaker/Extraordinary Convention Planning Committee (CECPC) and State chairmen of the party.

Bello shared photos of him seated in what appears to be the position meant for the Chairman of the APC-CECPC, Governor Mai Bala Muni of Yobe State.

He captioned the photos: “I am currently presiding over the Caretaker/Extra-ordinary Convention Planning Committee of the APC at the National Secretariat of the Party.”