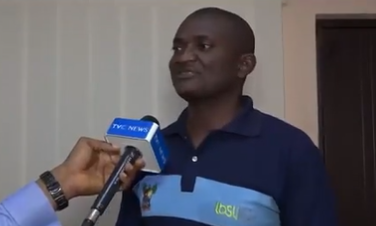 BRT bus driver, Andrew Nice, 47, who was arrested today over the abduction and murder of 22-year-old Bamise Ayanwole, has given his own account of what transpired.

In an interview with TVC news, Andrew recounted how he picked up Bamise and how some passengers he also picked up forcefully abducted her.

”I picked her from Chevron and I picked the other three guys at Agungi. When those guys showed me the weapon, I was kind of…I can’t be myself anymore. Fear has come in me.

When I opened the door, they came down and started dragging her. When I saw she was crying for help, I was helpless. I was thinking that she was inside the vehicle holding the iron.

He said he was arrested in the place where he ran to when the incident happened. According to him, he was afraid.

Watch a video of him speaking below