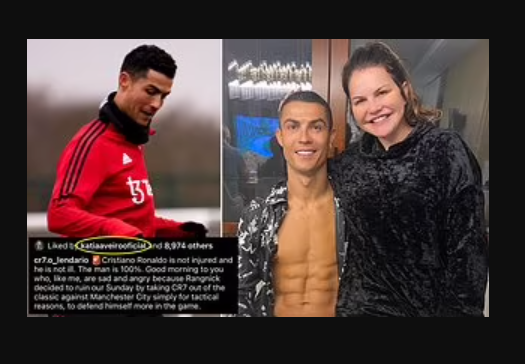 Cristiano Ronaldo’s sister has fuelled speculation by liking a post on Instagram suggesting the forward is not injured after Manchester United interim boss, Ralf Rangnick disclosed that he was injured

According to him, 37-year-old had a hip flexor injury and was ruled out of Sunday’s Manchester showdown.

Ronaldo then decided to fly out to Portugal rather than support his side as they suffered a heavy 4-1 defeat.

His absence has come under intense speculation after his sister, Katia Aveiro, liked an Instagram post before the match which claimed Ronaldo that was not injured and had been dropped by boss Ralf Rangnick.

The post, which was published by a popular Ronaldo fan account, read: ‘Cristiano Ronaldo is not injured and he is not ill. The man is 100 percent.

‘Good morning to you who, like me, are sad and angry because Rangnick decided to ruin our Sunday by taking CR7 out of the derby against Manchester City simply for tactical reasons, to defend himself more in the game.’

‘There seems to be. I just don’t like it when the manager talks about this hip flexor, I don’t get it.

‘We talk about Ronaldo being some sort of machine, he’s very rarely injured, and then every now and again he comes out with something like that and says hip flexor. It doesn’t add up to me.’

Cable vandals and others arrested in Zamfara