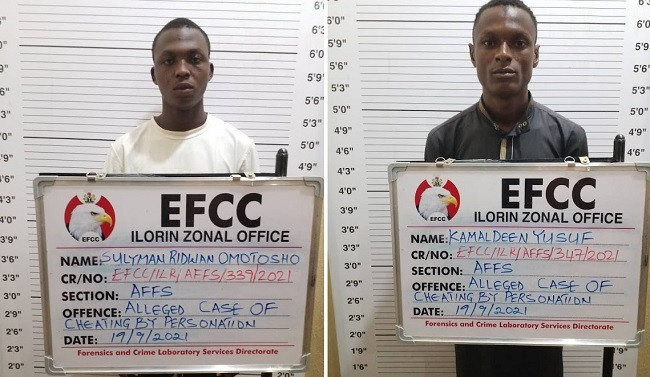 Fake American real estate manager, one other jailed for love scam in Kwara

The convicts were prosecuted on one count separate charge by the Ilorin Zonal Command of the EFCC.

They are Kamaldeen Yusuf, a self-styled Real Estate Manager based in United States of America and one Sulyman Ridwan Omotosho from Ilorin West Local Government Area of Kwara State

The duo were among the thirty suspected internet fraudsters arrested in Malete, Moro Local Government Area of Kwara State on September 19, 2021 by the operatives of the EFCC during a sting operation, following intelligence reports received by the Commission.

Upon arraignment, the defendants pleaded guilty to their respective charge.

Following their guilty pleas, Innocent Mbachie and Rasheedat Alao, who prosecuted the two cases on behalf of the commission, called two witnesses to review the facts of the cases. The witnesses, who are operatives of the EFCC, tendered in evidence several incriminating documents printed from defendants’ devices, their extrajudicial statements and mobile phones used to perpetrate the crime.

The counsel urged the court to consider the evidence placed before the court, the plea of guilt and all the exhibits tendered and uphold the case of the prosecution.

Delivering judgement on the two cases, Justice Akinpelu said that the court had carefully considered the case of the prosecution and found merit in the two cases.

The judge, thereafter, sentenced Kamaldeen and Sulyman to six months imprisonment each with the option of fine of N100,000 each. She also ordered the forfeiture of the mobile phones recovered from the convicts at the point of arrest to the Federal Government.