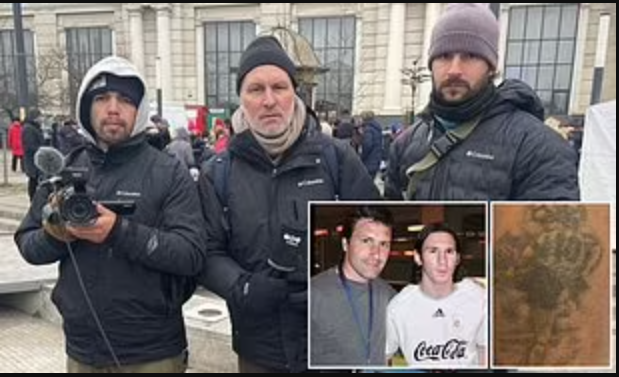 South American journalists have revealed how Lionel Messi and Diego Maradona helped get them out of trouble with authorities in Ukraine.

The journalists are in Ukraine reporting on the conflict after Russia’s invasion.

According to Argentine TV channel Telefe, they were stopped at a checkpoint, taken to the police station, and questioned.

At that point, Argentine football legends Messi and Maradona got them out of trouble.

Chilean journalist Daniel Matamala said on his Instagram story: ‘Today, at one of the road checkpoints, the police seized our documents, cameras, telephones, and escorted us to the police station.

‘The first interrogations were tense: it is a country at war and spies or saboteurs are suspected.

‘Until one of the policemen saw the passports of my Argentine colleagues and among a lot of words in Ukrainian, he said two that we understood ‘Messi’ and ‘Maradona’.

‘That’s where everything changed. Our great cameraman Juan Zamudio showed that he has a tattoo of Diego Maradona in the calf’.

Argentine journalist Guillermo Panizza said his phone was returned to him when he showed authorities a picture of him with Messi.

Panizza had an Instagram post showing the pair of them posing at the 2007 Copa America, a picture the authorities recognised.

He added: ‘It’s so big that he helped us get out of a police station in Ukraine. Thank you for this photo and for being Argentine’.

Panizza revealed on his social media that at the South American tournament 14 years ago, he was initially looking for a photo with defender Roberto ‘The Mouse’ Ayala rather than Messi, but the youngster was there instead.

The Telefe Noticias journalist earlier posted from Ukrainian city Lviv with his colleagues saying: ‘We are family. We are brothers. The war put us in a place of permanent challenge.

‘We came to discover why human nature is determined to generate destruction, but also how solidarity ties sustain life, endure, and move us. We see the help, the gestures of love from the volunteers and we think that yes, there must be hope.

Panizza then praised cameraman Zamudio for his quick thinking in getting them out of trouble.

He concluded: ‘HUGE. Outstanding workers and generous people. THANK YOU. It will never be the same again between us and in the relationship with others. Long live love, long live La Paz!!’

”They removed her private part. She saw hell on earth before she died”