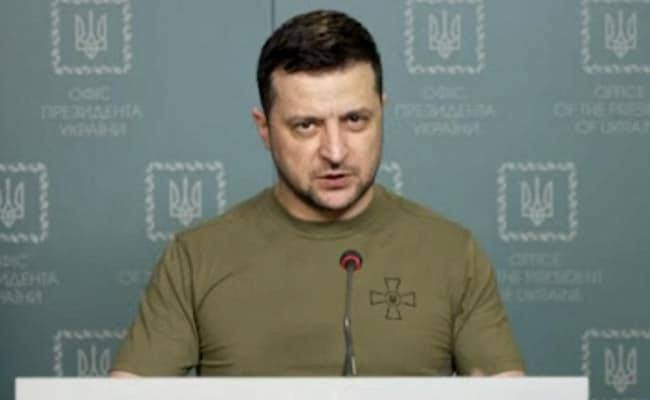 ‘We will fight in the forest, fields, shores and streets’

Ukraine’s President Volodymyr Zelensky echoed iconic UK leader Sir Winston Churchill, vowing Ukraine would fight Russia ‘in the forests, in the fields, on the shores and in the streets’

In a Tuesday, March 8 speech, via video link from Kyiv to the UK House of Commons, Ukraine’s leader delivered what was called an “historic address” after House Speaker Sir Lindsay Hoyle approved a request for him to speak directly to MPs in the UK.

Zelensky, in the address,also quoted Shakespeare.

“For 13 days this question could have been asked.

“But now I can give you a definitive answer.

“I would like to remind you of the words the UK has already heard, which are important again.

“We will not give up and we will not lose. We will fight till the end at sea and in the air. We will continue fighting for our land whatever the cost.

“We will fight in the forests, in the fields, on the shores, in the streets.

“We will fight on the banks of rivers.”

Zelensky, praised for not leaving Kyiv despite Russia’s onslaught also claimed “over 50 children have been killed” by Russia’s bombs.

Zelensky added: “These are the children that could have lived but these people have taken them away from us.

“We are the country that are saving people despite having to fight one of the biggest armies in the world. We have to fight the helicopters, rockets.”

After the address, all the MPs gave him a standing ovation.

Prime Minister Boris Johnson, responding to the speech made by President Volodymyr Zelensky, told the House of Commons:

“Never before in all our centuries of our parliamentary democracy has the House listened to such an address.

“In a great European capital now within range of Russian guns President Volodymyr Zelensky is standing firm for democracy and for freedom.”

“In his righteous defence I believe he has moved the hearts of everybody in this House.

“At this moment ordinary Ukrainians are defending their homes and their families against a brutal assault and they are, by their actions, inspiring millions by their courage and their devotion.”

Johnson said “one of the proudest boasts in the free world” is “I am Ukrainian” – which he said in Ukrainian.

He said: “This is a moment to put our political differences aside and I know I speak for the whole House when I say that Britain and our allies are determined to press on with supplying our Ukrainian friends with the weapons they need to defend their homeland as they deserve, to press on with tightening the economic vice around Vladimir Putin and we will stop importing Russian oil.”

Johnson went on: “And we will employ every method that we can – diplomatic, humanitarian and economic – until Vladimir Putin has failed in this disastrous venture and Ukraine is free once more.”

McDonald’s closes 850 restaurants in Russia, days after being criticized for taking a neutral stance on the Russian invasion of Ukraine

“Look beyond how the society sees your decision as a woman”, Ooni of Ife’s estranged wife, Queen Naomi encourages women