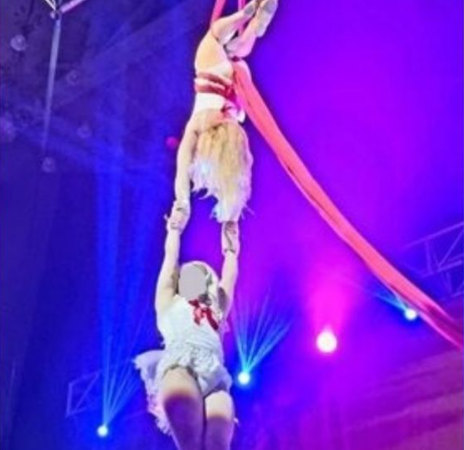 Acrobats crash 30ft to the ground as terrified audience watch

Two acrobats at a top circus plunged 30ft to the ground in front of a horrified audience when the show went wrong.

Two women were performing on ribbons suspended in the air when they fell to the ground.

The performance was stopped and screens were immediately put around the two performers after the accident at Victoria Hall in Stoke-on-Trent, England, on the evening of Friday, March 11.

At first, the crowd thought it was part of the production, but they realised it was serious when theatre staff asked them to leave the venue and the show was stopped.

It’s understood that the accident took place 10 minutes after audience members returned to their seats after the intermission.

The Circus’s Facebook post read: “Thank you for all your kind words. I’m glad to say the girls are ok. Please let’s give them some privacy now.”

Rachelle Donson said: “It was so distressing to witness this. I really pray these girls are okay. Fantastic show up until then.”

Loz Davis wrote: “It was an amazing show! But so shocking to see what happened. Hope both the girls make a full recovery.”

Kazduck Harrison added: “We thought it was part of the show but soon became obvious it wasn’t. Black screens were put around them and we were asked to leave. Such a shame.”