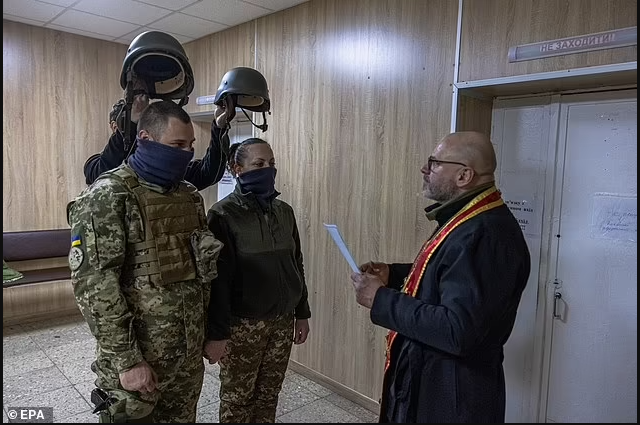 A Ukrainian couple who first met during the 2015 war in the country have decided to get married before they take on Russian troops in the outskirts of Kyiv.

The couple, who met for the first time during the war in Donbas seven years ago, were pictured at the ceremony held in a hospital in Brovary earlier today.

The soldiers began their relationship in 2022 when they met by chance during the Russian invasion of Ukraine.

‘There is a hard time ahead of us, so we decided to do it now’, said the bride as military chaplain and medic Yevgeny lead the ceremony for the couple.

The chaplain also held services for other military and medical personnel as well as for civilians.

This is the second frontline wedding to take place in Ukraine in recent weeks.

Earlier this month, Kyiv’s mayor paid a visit to a newlywed couple who got married on the frontlines, donned in military uniform, and serenaded by soldiers.