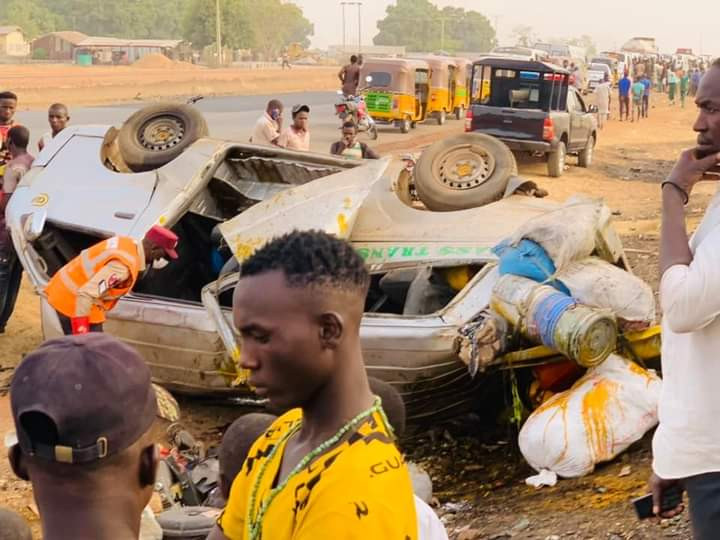 Seventeen persons have died in multiple crashes that occurred along the Zaria-Kaduna highway.

It was gathered that the first accident occurred on Saturday, March 12, when a Toyota Carina car with registration number KTL 251QG, lost control around Nuhu Bamalli Polytechnic, Zaria and somersaulted after hitting the median barrier.

The Unit Commandant, Federal Road Safety Corp, Zaria Command, Abubakar Tatah Murabus, who confirmed the accident, said all the victims have been evacuated to the morgue.

Murabus, who blamed the accident on overload and over-speeding, said the five-seater car travelling from Kaduna to Bakori in Katsina State, was loaded with 11 persons.

“The accident occurred on Saturday afternoon around 2 pm along Tariyar Sarki near Nuhu Bamalli Polytechnic, Zaria,” he stated.

“This is why we warn drivers to desist from the habit of overloading passengers. You can imagine this car, which was meant to carry five people including the driver had instead carried eleven persons, and the driver was said to be overspeeding despite the number of people in the car,” he said.

He gave the name of the driver as Musa Iliyasu.

According to NTA Yola, six passengers travelling from Warri to Jigawa state, were killed in the second crash occurred in the early hours at Rigachikun, along Kaduna-Zaria Road on Monday morning, March 14.

Eye witness account revealed that the vehicle swerved at a sharp bend along Rigachikun area due to over-speeding.

Officials of the Federal road safety corps have evacuated the dead bodies to mogue and other passengers who have sustained injuries for treatment.