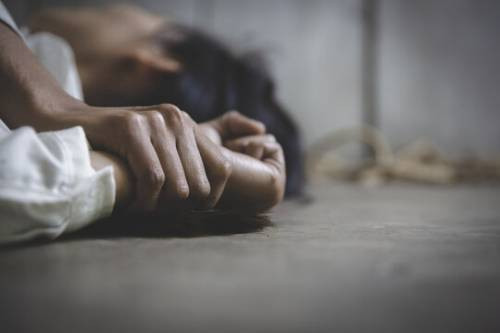 The police in Lagos state has arrested a 46-year-old man identified as Jimoh Rafiu for allegedly defiling his 6-year-old daughter over the excuse that his wife refused to have sex with him.

Sahara Reporters reports that the suspect was arrested after his daughter informed members of the Advocates for Children and Vulnerable People’s Network that she had been repeatedly defiled by her father, suggesting the act of penetration.

According to the victim’s mother, the father was in the habit of undressing the child and each time she returned from work, she asked why he did so and he would claim it was because of the hot weather. However, after showing signs of pain in her lower abdomen and vagina while taking a bath, the victim was queried by her mother who later confronted the perpetrator based on the accounts of the child.

Meanwhile, the father of the child confessed to committing the act and promised his wife to stop the act.

However, after several days, the little girl could no longer bear the pain in her lower abdomen, a situation that made the mother report the case at the Idimu Police Station, leading to the arrest of Jimoh. Jimoh confessed to committing the crime but blamed it on his wife’s refusal to sleep with him and on the influence of alcohol.

“The six-year-old survivor said her daddy lies on her and puts his hand and manhood in her vagina, and points to her lower abdomen. According to the mother, before she comes back from work, the perpetrator always undresses their daughter, explaining that it is because of heat. And since he is the father, she never gave it a thought.

She said there was a day she was bathing the survivor, the survivor didn’t allow her to wash her vagina. She tried to force her but she was crying seriously. She took her inside and asked her who had been touching her vagina that was making her feel pain.

The reply shocked the mother when the little girl said, “it’s my daddy”. She immediately confronted him but he didn’t deny it and he promised to stop the act.

Two days later, the survivor began to cry because of pain in her lower abdomen. She was taken to a nurse that gave her some pain relief. There was no improvement. The mother reported to the Idimu police station and was referred to the Idera Sexual Assault Referral Centre (SARC) for support.

On February 24, the perpetrator was arrested by OC Human Right Madam Wunmi and her team. Thanks to IPO Peju for her prompt response.

The perpetrator was asked if he had been having sex with the daughter? He answered in the affirmative. The reason he gave was that his wife refused to have sex with him. He said he abuses his daughter after he drinks Ogogoro (local gin).”

Russian State TV demands that America return Alaska and California’s Fort Ross to Russia, threatens nuclear strike on US in response to sanctions, and calls for public hangings in Ukraine