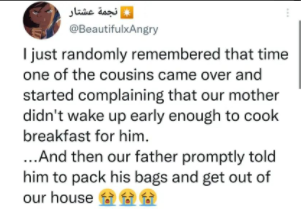 A Twitter user has shared the story of how her father handled a relative who was angry that her mum failed to wake up early to make breakfast for them.

”I just randomly remembered that time one of the cousins came over and started complaining that our mother didn’t wake up early enough to cook breakfast for him. …And then our father promptly told him to pack his bags and get out of our house

Lmao the fool was probably expecting some patriarchal backing as per “relative from the father’s side” and instead was met with the shock of his life. Like, did you hire any maid here to be preparing food for you? Useless man”

“That’s so primitive and ghetto”