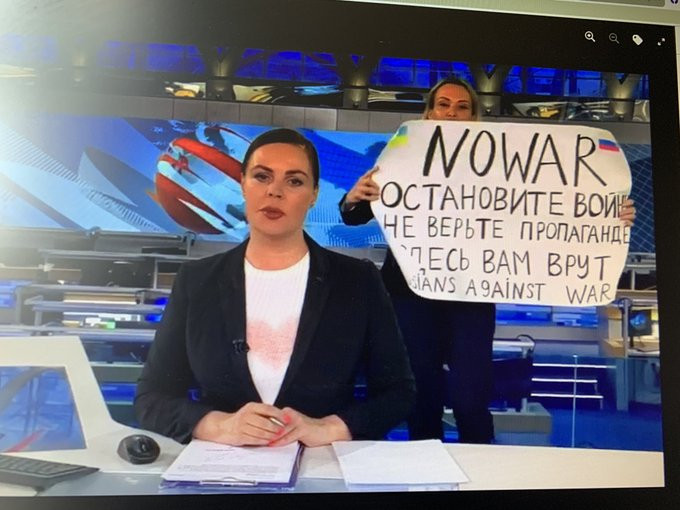 A woman holding an anti-war sign ran on to the set of a Russian evening news programme on the state-controlled Channel 1, to interrupt the show with a ‘no to war’ sign.

Russian TV news is tightly controlled by the Kremlin and reflects only the Russian version of events in Ukraine but on Monday evening, March 14, a brave woman named as Marina Ovsyannikova, an editor at the channel 1, controlled by the government held a clearly visible sign behind the presenter, which read: “No war, stop the war, don’t believe the propaganda, they are lying to you here.”

The woman is now in police custody according to Reuters

Her voice could be heard during the broadcast saying, “No to war! Stop the war!” before the programme director cut early to a recorded news report.

Before the protest, which happened live on the nightly news programme, she recorded a video in which she called events in Ukraine a “crime” and said she was ashamed to work for what she called Kremlin propaganda.

She called on the Russian people to protest against the war, saying that only they could “stop the madness”.

From the moment Ms Ovsyannikova’s identity became known, she has received dozens of comments on her Facebook page in Ukrainian, Russian and English, thanking her for her actions.

New laws introduced since the invasion of Ukraine have made the media industry in Russia more harsh towards independent bias reporting.

The Legislation passed earlier this month made it illegal to call the military action an “invasion” or to disseminate “fake” news about it.

State-controlled Russian media refer to the war as a “special military operation” and paint Ukraine as the aggressor, with a government described as neo-Nazi.

Lots of social media sites have also been blocked, further restricting the number and diversity of news sources available to people inside Russia.

#REPOST @withukraine 10 minutes ago on the Channel 1 of the state Russian TV show, an activist jumped out from behind the TV presenter with a poster “No to war! Stop the war! Don’t trust this propaganda! Everyone is lying to you here!” #IStandWithUkraine pic.twitter.com/Rve45OEcj3

We’ll show why Old Trafford is Theatre of Dreams -Ronaldo