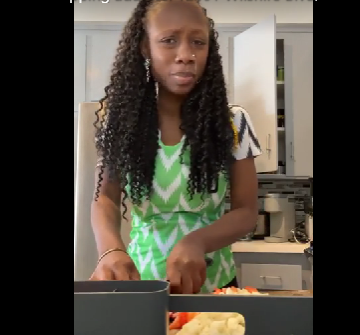 “Are you mad?” Korra Obidi slams those telling her to leave social media amid her marriage crisis (video)

Korra Obidi has slammed followers advising her to leave social media for now.

The dancer who welcomed her second child two weeks ago is going through a marriage crisis after her husband Justin Dean announced just days after their child’s birth that he is divorcing her.

Korra went live this morning while making breakfast and some people commented, telling her to take a break from social media.

She blasted them, telling them that social media is a job for her and it’s how she makes her money.

She asked how they expect her children to eat if she isn’t creating and getting paid on social media.

She then told them that not everyone is on social media for fun.

She said that now, more than ever, she needs to be on social media so that she can earn a living for herself and her kids.