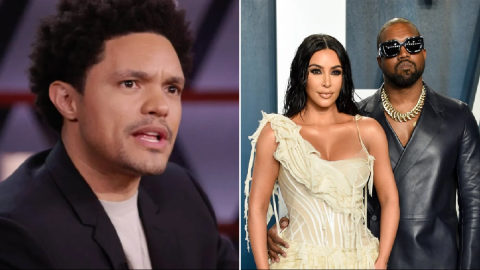 Comedian and TV host, Trevor Noah has weighed in on Kanye West’s public feud with his ex-wife Kim Kardashian and her new boyfriend Pete Davidson.

In the latest episode of The Daily Show, Noah warned that the bitter feud could get violent and it is up to society to prevent it.

His comments came after Kanye accused Kim of not allowing him to bring their four children, including Saint, six, Chicago, four, and Psalm, two, to Sunday Service.

He said even though he’s aware the feud might be a ploy by Kim Kardashian to sell her new reality show ‘The Kardashians’ , it could also be a way of her telling the world that she’s being harrased.

Noah said that we need to take action to stop the ‘car crash’.

‘Two things can be true,’ he said. ‘Kim likes publicity. Kim is also being harassed.’

Drawing on his own family experience, Noah recalled how people would tell his mother she was ‘overreacting’ about the abuse she was facing.

Noah said his family story ended with her getting shot in the head by his stepfather.

‘I’m not saying Kanye will [do that],’ Noah stressed. ‘But as a society, we have to ask ourselves questions.

‘Do we wish to stand by and watch a car crash when we thought we saw it coming? Or do we at least want to say, “slow down, let’s all put our hazards on, because there’s a storm coming and sh*t might go down”.’

Concluding the segment, Noah added: ‘If Kim Kardashian cannot escape this, then what chance do normal women have?’

Responding to Trevors statement on the show, Kanye wrote; ‘All in together lord’ alongside a photo of Trevor Noah’s Wikipedia page.

Watch the videos below

Trevor Noah is saying what Kim Kardashian is going through is terrifying to watch, and it shines a spotlight on what happens when women choose to leave,” pic.twitter.com/6ElYv3z1rD

Trevor Noah also appeared concerned about the way the situation could further escalate, recounting his own experiences growing up in an abusive household. He noted his mother was told she was “overreacting” before being shot in the head by Noah’s stepfather. pic.twitter.com/ZeHpxpU3J9

“As a society, we have to ask ourselves questions,” Noah said. “Do we wish to stand by and watch a car crash when we thought we saw it coming?”

Noah expressed hope, though, that he can look back at this warning and say, “I was an idiot. Nothing happened. pic.twitter.com/3ZxEINrZMd

Is that the new strategy to win election? Actress, Rita Dominic asks people who insults those that complain about Nigeria