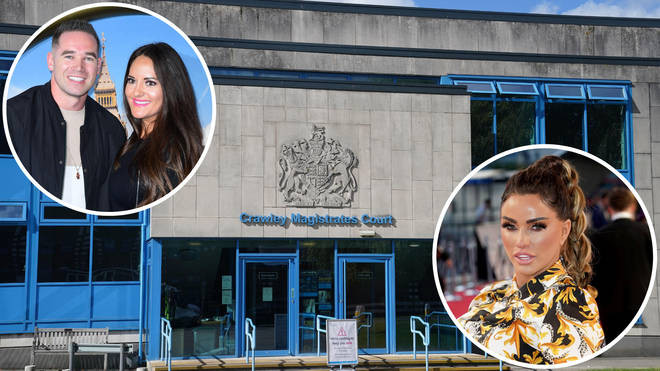 Katie Price has been charged with harassing the fiancée of her former husband Kieran Hayler and will appear in court.

Katie, currently on holiday with fiancé Carl Woods, will appear before magistrates in Crawley next month for breaching a restraining order against Michelle Penticost.

The troubled model was arrested on January 21 for sending an abusive text to Michelle. She spent a night in a cell after being quizzed by officers at Worthing Police station who had earlier picked Katie up from her home in Horsham after a report was made.

MailOnline understands that 43-year-old Price breached the order a second time when she sent an anonymous letter attacking Michelle to a relative just before flying out to Thailand.

A source said: ‘Katie is playing a dangerous game and her actions have led her into deep trouble.

‘Kieran and Michelle were deeply concerned after discovering she sent a letter, believing Katie is ignoring the rules of the restraining order as this is the second time it’s happened in three months.

‘It was sent anonymously from Heathrow on the day she left for Thailand.

‘They know it’s her and are concerned by her unpredictable behaviour.’

A police source told MailOnline: ‘Katie Price was arrested a few weeks ago for breaching a restraining order placed against her following an argument with the fiancée of her former partner, Kieran Hayler.

‘Now she is believed to have written an anonymous note attacking Michelle Penticost via one of her family members.

‘As such Katie has been charged with harassment and will appear before Crawley magistrates next month.’

Mother of five Katie was banned from contacting Michelle, 39, ‘directly or indirectly’ after swearing at her in a school playground in 2019.

Breaking the terms of the restraining order carries a maximum prison sentence of five years.

Katie also risks jail time for being arrested while still on licence for her drink-drive shame.