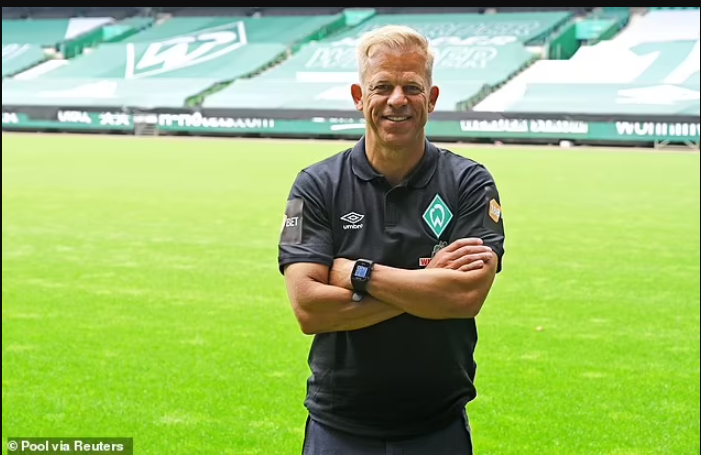 Ex-Werder Bremen coach, Markus Anfang apologies for forging a Covid-19 vaccination card; reveals he is still ‘afraid’ of the vaccine

The 47-year-old along with his assistant, Florian Junge, resigned from their respective positions in November after German authorities launched an investigation into an alleged use of a forged Covid-19 vaccination documentation.

In his first interview since the incident, Anfang admitted he failed in his role as a ‘role model’ and explained his fears of the vaccination.

He told ZDF Sports Studio: ‘I have in no way lived up to my role as a role model. I have disappointed many people, lied to them, and done a lot of damage to my family,’ he said.

‘I can understand that many people are angry and disappointed. I would love to turn back the clock and undo this mistake.’

Anfang also admitted he had his worries about the vaccine once his father suffered a cardiac arrest and is to this day still ‘afraid’ to take it.

‘I’m still afraid of the vaccination. He [father] had a very bad heart attack, was more dead than alive, was resuscitated nine times’, the German said.

‘I experienced it first hand and when you see all this, how your dad fights his way back to life – that just does something to you. This fear that I have as a result is difficult for me to take away.’

He added: ‘In the end, when I’m asked for explanations, they’re not excuses for what I did. I used a fake health certificate.

‘I wasn’t vaccinated, I lied, I didn’t tell the truth because it was for me at that moment it was like I can only stay in the job and do my work with a vaccination. That’s when I made this mistake. I’m terribly sorry.’

A statement from the German Football Association (DFB) said: ‘Through their actions, Markus Anfang and Florian Junge have violated their role model positions as coaches to a considerable extent.’

Anfang took the Werder Bremen job last summer following the club’s relegation from the Bundesliga. During his time there, he won just five of 14 games. Prior to that, he managed the likes of Darmstadt 98 and FC Koln among others.