Before things got sour: Checkout this lovely throwback video of Korra Obidi and her husband

The past few weeks have not been so kind to the marriage of popular US-based Nigerian dancer, Korra Obidi after her husband, Justice Dean took to social media to out her for alleged infidelity.

It’s been a rollercoaster of emotions for the dancer whose marital crisis has not only taken its toll on her and her spouse but also, their children.

Korra, who had for a while been mum about the whole crisis, recently revealed the reason she is scared to open up about her embattled union. According to the Korra, she’s afraid to tell the world about her marital crisis because the internet never forgets and she wouldn’t want to jeopardize her family’s reputation. Read more about it here

While the saga continues as fans and well wishers hope for the best for their union, we stumbled across this throwback video of the couple during the genesis of their relationship.

The young couple are seen in the video miming to an old hit song by Nigerian rapper, Speed Darlington and they clearly were serving lovely interracial couple goals and netizens would come to love them in the near future. 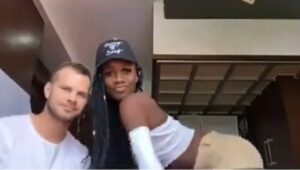 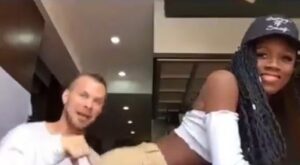