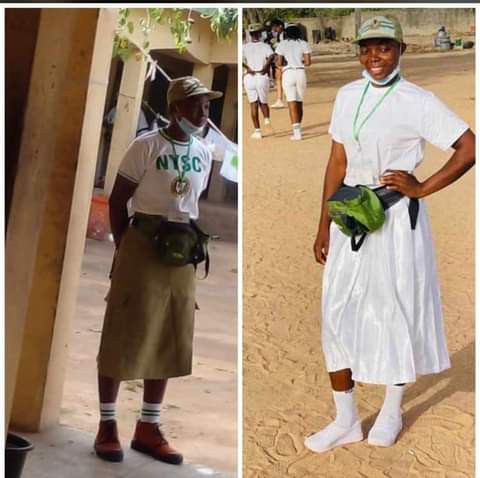 Management of the National Youth Service Corps (NYSC) in Oyo State has debunked a video making the rounds that a female corps member was wearing a long white skirt instead of the standard white shorts at the orientation camp, Iseyin.

Photos and videos sighted by LIB show a female corps member wearing white and khaki skirts at one of the NYSC orientation camps.

Assistant Director, Press and Public Relations Unit, NYSC, Oyo State, Mrs Olatoye Christy, in a statement, said that no such corps member was present at the orientation camp, adding that every corps member is abiding with the rules of the scheme.

“The attention of the management of the NYSC Oyo State has been drawn to the video that has gone viral in the social media showing an unidentified corps member that was purportedly spotted in NYSC Oyo State camp wearing a long white skirt instead of the conventional white short,” she said.

“It is important to set the record straight that the scene was never captured in Oyo State camp. Corps members are mandated to always put on the white T-shirt and white shorts as their uniform in camp and there was never any corps member who refused to comply with the NYSC dress code whether based on religious belief or any other reason.

“The NYSC camp is a regimented setting and no individual can be allowed to behave contrary to the rules and regulations guiding the orientation exercise. The general public is hereby advised to disregard the video as a scenario in Oyo camp as such never happened in the permanent orientation camp, Iseyin.”