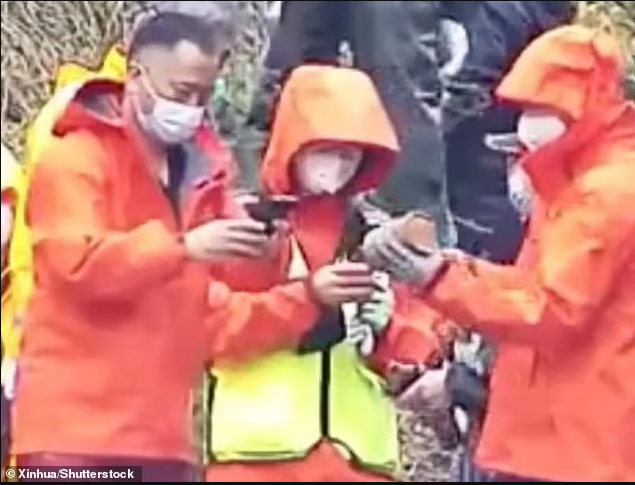 Chinese authorities searching the site where a China Eastern jet crashed, killing all 132 people on board, have found the aircraft’s black box.

The discovery comes after the head of aviation safety revealed pilots of the doomed flight did not respond to multiple calls from air-traffic controllers as the plane entered a fatal dive into a mountainside.

The Chinese Boeing 737-800 was carrying 123 passengers and nine crew from Kunming in Yunnan province to Guangzhou when it crashed on Monday afternoon March 21, outside the city of Wuzhou in the Guangxi region.

All 132 people onboard are presumed dead after rescue workers speculated that the fire resulting from the crash had ‘totally incinerated’ the passengers and their belongings, before causing damage to the surrounding forest.

An air-traffic controller tried to contact the pilots several times after seeing the plane’s altitude drop sharply but got no reply, Zhu Tao, director of the Office of Aviation Safety at the Civil Aviation Authority of China, said at a news conference on Tuesday evening.

‘As of now, the rescue has yet to find survivors,’ Mr. Zhu said. ‘The public security department has taken control of the site.’

The plane went into an unexplained dive an hour after departure, suddenly plummeting 30,000ft in two minutes before slamming into the ground at 350mph.

Investigators, who say it is too early to speculate on the cause of the crash, said the plane stopped transmitting data 96 seconds into the fall.

The investigation, which Zhu said would be ‘very difficult’, was temporarily suspended on Wednesday after rain soaked the debris field and filled the red-dirt gash formed by the plane’s fiery impact.

Zhu said the investigative team would make ‘all-out efforts’ to collect evidence and that they were focusing on searching for the aircraft’s flight recorder box.

‘We will take into consideration all factors in analysing the cause of the accident,’ he added.

Local media identified the captain of the aircraft as being Yang Hongda, the son of a former airline pilot, who aviation professionals said had an ‘excellent’ safety record.

The first officer was named as Zhang Zhengping, a 58-year-old with 40 years experience and more than 30,000 hours of safe flying, reported the Times.

“My debt is becoming too much”, AY Makun cries out ahead of his wife’s birthday