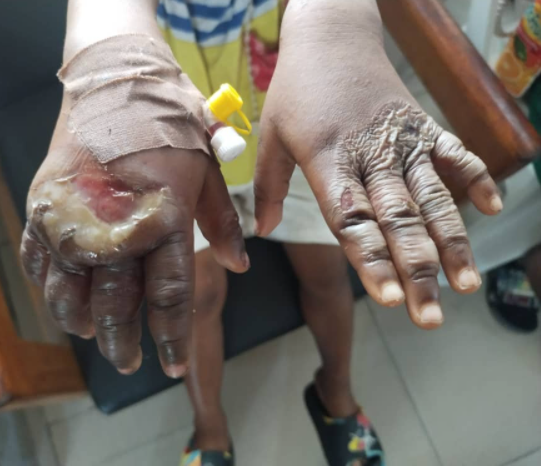 A mother-of-two has been accused of putting her five-year-old daughter’s hands in hot water for stealing her fish.

Idoroyen, a food vendor, reportedly prepared 19 pieces of fish for her business and went out but met only one piece of fish when she returned.

She discovered that her 5-year-old daughter ate the fish so she punished her by dipping her hands in hot water, Guardian reports.

Counsel to Basic Rights Counsel Initiative (BRCI), the Non-Governmental Organisation (NGO) in charge of the child’s case, Mr. James Ibor, alleged that the mother admitted that the little girl had not eaten before stealing the fish.

He said: “The mother alleged that her five-year-old daughter stole her fish, so she dipped her hands in a very hot water, that was how she reacted to the alleged stealing.

“Meanwhile, she admitted that when it happened, the child had not eaten, which means she must have been hungry.

“The woman has nothing, the father of the child abandoned them two years ago and she still has another eight-year-old daughter.

“They can barely feed and she is owing house rent, so if we had not intervened with treatment immediately, that child’s burns would have been badly infected.”

Mr Ibor said the matter has not been reported to the police because the child needs the support and care of her mother while in the hospital receiving treatment.

Ibor, who assured that the perpetrator will soon be handed over to the police for prosecution, explained that the child has been moved from a private hospital to the General Hospital in Calabar, where a specialist is handling her treatment.

He said: “A crime has been committed and of course, the police will have to be notified.

“She needs to pay for her crime, but we have not taken that decision yet, because it will not be proper to do that now.”

Lady reveals the state of the water they’re paying N300k for at an estate in Chevron, Lagos

“Why does everyone think intimacy connotes intercourse?” – Denrele Edun cries out after being dragged for saying he had intimate moments with late Goldie