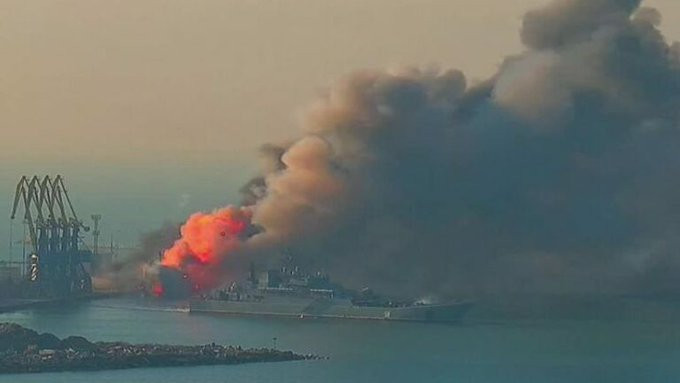 A Russian ship and two other Russian navy vessels have been destroyed by the Ukraine military in the occupied Ukrainian port city of Berdyansk.

The Ukrainian military posted footage on Thursday, March 24 saying the warship known as the ‘Orsk’ had been hit by its forces.

Berdyansk, a port city which links annexed Crimea to the besieged port of Mariupol and can help create a land bridge to mainland Russia was seized four days after Russia invaded Ukraine. Russia has used the port as a base to ferry in equipment for its troops.

The Russian army’s TV channel hailed the arrival of the Orsk in Berdyansk last week as an “epic event” as it was the first Russian warship to dock there.

Video posted by the Ukranian navy and on social media showed explosions and a big ship on fire at the port at 07:00 (05:00GMT) on Thursday.

While the Orsk was said to have been destroyed, fire reportedly spread to other vessels as well as an ammunition depot and a fuel terminal in the port. Footage from the scene appeared to show two ships sailing at speed from the port.

Ukrainian officials said the attack on the Orsk had further symbolic value, suggesting that it may have taken part in Russia’s original capture of Crimea in 2014, pointing to medals apparently awarded to the ship’s commander and a crewman.