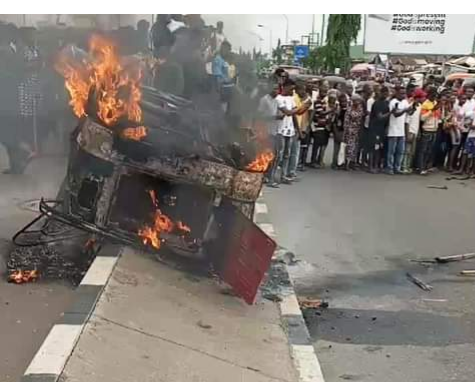 A suspected ‘one chance’ robber has been set ablaze by angry mob in Uyo, Akwa Ibom State.

The incident happened at about 11:00 am on Friday, March 25, at the Goodluck Jonathan Flyover near Itam Market, along Ikot Ekpene Road in Uyo.

It was gathered a woman had boarded the tricycle heading towards the market when one of the occupants who posed as a fellow passenger allegedly seized her handbag containing cash and other personal belongings.

The woman raised alarm which attracted a quick response from angry traders, who cordoned off the tricycle and captured one of the suspects, while one escaped.

According to a trader at Itam market who spoke to the Vanguard, the mob beat up the suspected robber before setting him ablaze.

“It was around 11:30am from my shop I started hearing people shouting where is the money. I learnt that he and two other members of his gang, a man and woman robbed one woman of her money inside the tricycle and pushed her out inside town,” the eyewitness narrated.

“I learnt the woman’s son immediately used another tricycle to pursue them and catch them here at the flyover. Maybe as he refused to return the money they stole those people descended on him. When they were beating him inside his tricycle, I thought they were dragging about transport fare.

“It was when they now set him ablaze inside the tricycle that I decided to find out what actually happened. Even some other commercial tricycle and Mini Bus operators stopped at the Flyover and joined hand to beat him up.

“He was set ablaze inside his Keke Napep, but he later jumped out. But two other members of his gang, a man and woman succeeded to run away. In fact we saw the lady run pass in front of our shop, then we didn’t know what happened, we would have caught her.” he said.

Reacting to the development, the State Commissioner of Police, CP Amiengheme Andrew, warned against jungle justice on criminal suspects in the state.

Spokesperson of the command, SP Odiko Macdon, in a statement on behalf of the CP frowned at people taking laws into their hands.

“Jungle justice has no place in law because nobody has any right to take another man’s life”, he warned and enjoined the civil society to always hand over criminal suspects to security agencies for diligent prosecution.” he stated.