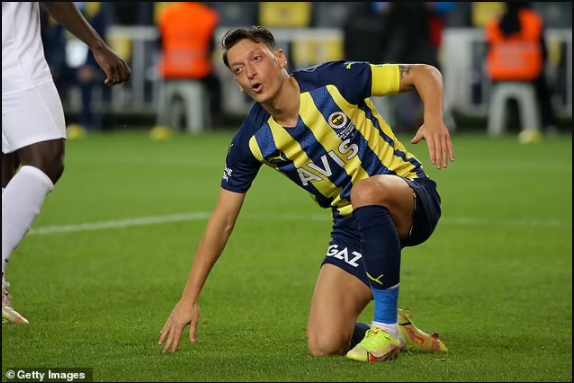 Former Arsenal midfielder, Mesut Ozil has responded to being excluded from Fenerbahce’s squad indefinitely with a cryptic tweet.

A similarly cryptic statement on the Turkish giants’ official Twitter account on Thursday March 24, confirmed the ex-Real Madrid star has been excluded from interim boss Ismail Kartal’s squad along with Ozan Tufan, who was on loan at Watford last season.

But Ozil has now broken his silence following the news, posting a picture on Twitter of the flag of Turkey and the club, with the message: ‘The main thing is Fenerbahce.’

Ozil’s exclusion came after reports of a verbal spat with the club’s interim manager and a lack of fitness in their last game.

‘Our Football A Team players Mesut Ozil and Ozan Tufan were excluded from the squad as per the decision taken. It is announced to the public,’ a statement read.

The club revealed they will make the reason behind the decision public in due course, but Ozil was withdrawn at half-time in Fenerbahce’s 2-1 win against Konyaspor at the weekend.

The 33-year-old former Germany international has made 37 appearances for the Turkish giants since joining from Arsenal in January last year.

But football.London claim the attacking midfielder was involved in a verbal altercation with Kartal in their victory against the second-placed side.

Ozil’s public exclusion from the squad prevents him from training with the first team ahead of their away fixture this weekend against 14th-placed Kayserispor, the report adds.

The 92-cap ex-Germany midfielder missed eight Fenerbahce games at the start of this year due to a lower back problem.

However, the report claims the club fear the injury has set Ozil further back physically, and he was replaced after playing at a ‘low tempo’ in the first half, according to Milliyet via Aksam.

The report adds Ozil’s situation was discussed by Kartal’s staff, who came to the decision the remaining weeks of the season would be very difficult for both parties if he continued to play.