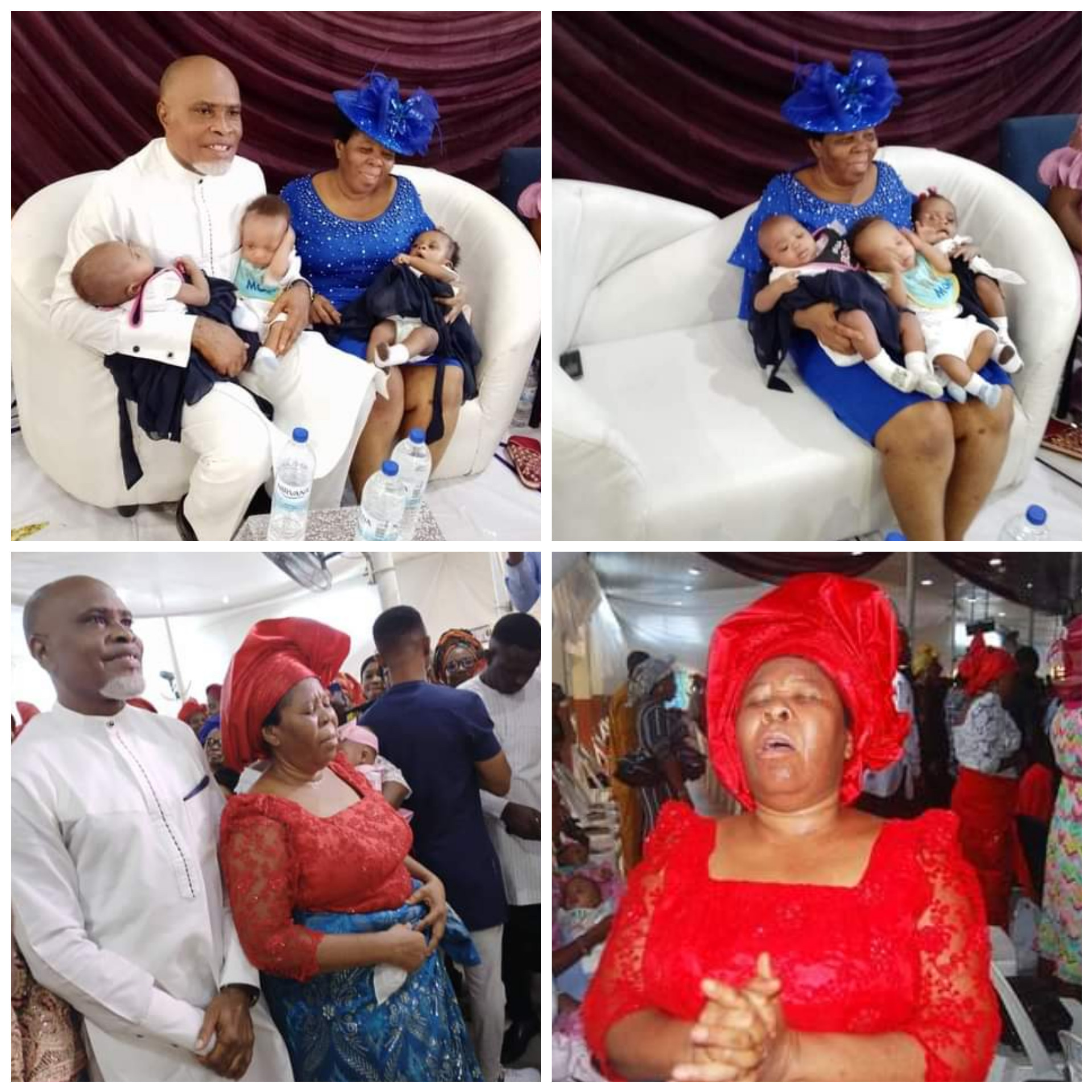 A Nigerian man, Deacon Michael Nwankwo and his wife, Victoria, who welcomed a set of triplets after 25 years of marriage, have opened up about their struggles and triumph.

LIB had reported about the Lagos-based businessman and his wife after the dedication of the children at the Assemblies of God Church in Ojodu, on Sunday, February 20, 2022 after welcoming their children in September 2021.

Speaking to Punch ,the couple revealed that they both got married as virgins, at age 26 and 24.

The couple also recalled how people mocked them over their situation, adding that Mrs Nwankwo had suffered several miscarriages before the birth of their daughters and son.

According to Nwankwo, his purpose of getting married at a young age was to have children and when that didn’t happen sooner than expected, it became tough for them.

Ultimately, the journey was a tough one. I am one person who earnestly desired children, and my purpose of getting married when I did was to have children and see my children and I grow together. I couldn’t imagine it would get to that point where I would have to wait for 25 years. During our first two months in the marriage, my wife got pregnant and unfortunately, due to inexperience we travelled to Ghana and she miscarried the baby. Thereafter, it just went up and down. It was not an easy journey to walk. My joy is that at the end of the day, when it seems like all hope was gone, God brought these triplets – two girls and one boy. he said

Deacon Nwankwo also stated that they had tried a lot of things as a couple to get pregnant, including IVF treatments;

“We sampled all godly opinions which came as advice in search of solutions. But the matter kept lingering from one point to the other. My wife was even operated upon in 2006 for fibroid. Thereafter, we also kept waiting from one point to another. So, it was not easy at all. We even did an IVF (in vitro fertilization) but it didn’t work for us. We spent so much, yet it didn’t come out successful. After some months, it just flushed out. We did whatever was godly as Christians. In all this, we had absolute faith in God and did not step out to try anything outside God. Many pastors and ministers also prophesied to us that God would answer us, urging us to be more patient. That was exactly what we did, but I must tell you that it was not easy at all. he said

One time, I remember a mentally-ill man met us around Jibowu Street, Lagos, some years back, and told my wife that she was not going to have a child but God would give her children at the right time. It was amazing and surprising.

Mrs Victoria recalled how her neighbours used to mock her during her trying times;

“Those things are inevitable. I remember in the place I used to live some years back, my neighbour gave birth to a baby boy, and in excitement, I walked out of my flat and wanted to carry the boy. The speed with which they zoomed into the room immediately I entered, I became cold. Did they think because I didn’t have children I would be a devourer of other people’s children? In organisations, when they want to talk about family, because we didn’t have children, they seemed not to pay attention to us, irrespective of age. she said

They wouldn’t even ask you to comment or anchor such programmes because they’d feel you have no experience. When I went out with other men and they started talking about their children and what they did at home, I would seem so lost. I wouldn’t even be able to enter into such conversations so I don’t cross the line or for someone to bring in a word that might hurt me. Most times, we stayed away from several meetings and activities that would remind us of those things. The journey also helped us grow stronger in God.

Something happened when my friend died. He had no wife and no children. So, it was me and another friend who buried him in Lagos. After the burial, I began to ask myself if that was how I would also end up without a child of my own to continue my lineage. I even started considering adoption (laughs). It brought a lot of fear into me. “What becomes of me when death calls?”I asked.  It was serious mental and emotional torture.

Some of my friends, up till this moment, when the news broke that I just gave birth to triplets didn’t even know I didn’t have kids all this while we were friends. One called me yesterday (Tuesday, March 15) to say he couldn’t believe that I didn’t have kids before now. He said it didn’t show in our faces.

Victoria also stated that her IVF had initally failed, however she “didn’t feel too bad.”

“I had emotionally worked on myself. It is only the living that can expect a miracle. So, I took out whatever would distort my peace. When I did the IVF, it didn’t go out immediately; it stayed for some weeks. When it didn’t work out, I took it off my mind. Even before the IVF, I had had several miscarriages but I didn’t let it disturb me. By the grace of God, I have a big heart to accommodate shock.

Asked how she felt after finding out she was pregnant, Victoria said;

“I had been waiting and expecting the miracle to come for many years because God spoke many years ago about our case. There were a lot of things he showed me personally. When I became pregnant, I reminded God of his word in I Timothy 2:15. I kept telling God that he alone could deliver me.

I had stopped seeing my period before the pregnancy came. What really happened was that I told God that we don’t celebrate menses rather what we celebrate is childbearing. So, I told him (God) that I didn’t want to be seeing my menses every month again; I wanted children, not blood flow. So, when it ceased, I wasn’t worried. I knew it was the hand of God.

Mrs Nwankwo who said she brought her three babies out by herself during delivery, concluded that she would love to have more children.